Is The Left Getting So Out Of Hand They’re Driving Cher Over To Our Side? 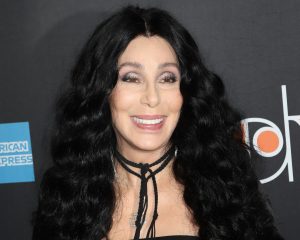 Several more seasoned Democrats and assorted liberals have already pointed it out: the party is being co-opted by insane ultra-leftists who are proposing policy after wildly absurd policy and, in so doing, driving more and more folks to vote red.

While a raging anti-Trumper (for now, anyway, give it time), aging pop icon Cher has hit recent headlines for publicly questioning the soundness of certain Democrat policies and talking points in recent tweets.

Nestled in among her dozens of incoherent rambles about social justice, the president and his “third Reich”, and show business, Cher occasionally takes a jab at the new wave of woke Dems and their ridiculous ideas.

Though she has since doubled down on the idea that Trump is evil and spiteful for his suggestion that sanctuary cities should take on their fair share of illegal immigrants, the septuagenarian star originally contended that such cities need to “take care of their own” before opening their doors to those who are here illegally:

I Understand Helping struggling Immigrants,but MY CITY (Los Angeles) ISNT TAKING CARE OF ITS OWN.WHAT ABOUT THE 50,000+🇺🇸Citizens WHO LIVE ON THE STREETS.PPL WHO LIVE BELOW POVERTY LINE,& HUNGRY? If My State Can’t Take Care of Its Own(Many Are VETS)How Can it Take Care Of More

Now, in a tweet that has since been deleted, Cher is expressing her shock and confusion at the thought of allowing prisoners, including violent offenders and murderers, to vote from behind bars. 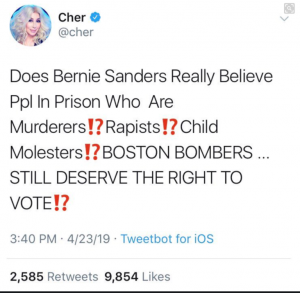 Yes, Bernie really said that prisoners of every stripe should be allowed to vote, even mass murderers. 2020 hopeful Kamala Harris kind-of-sort-of agreed, and our trusty Alexandria Ocasio-Cortez didn’t let us down in providing an almost Seussian defense for prisoners’ voting rights.

While Cher continues to post tweet after tweet of emoji-ridden nonsense, it’s at least marginally uplifting to see the occasional sign of intelligent life and willingness to question one’s own camp as they descend into madness.