Is The End Nigh? President Trump Actually Agrees With Ocasio-Cortez Concerning 2020 Election 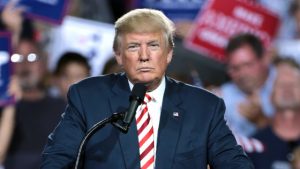 A series of reports have hit the Internet recently that have touted the negative results of 2020 election polls for President Trump, including one in particular that discusses Trump’s campaign booting internal pollsters after leaks of poll results supposedly showed former Vice President Joe Biden beating the president in several key states.

Trump then went on the offensive, taking to Twitter to boast about his optimism concerning re-election, which is where something we all thought would never happen actually occurred.

He agreed with Rep. Alexandria Ocasio-Cortez. The end of the world is nigh.

“Rep. Alexandria Ocasio-Cortez. ‘I think we have a very real risk of losing the Presidency to Donald Trump.’ I agree, and that is the only reason they play the impeach card, which cannot be legally used!” he wrote Sunday night.

The trolling tweet followed another tweet about impeachment and the 2020 election. “Almost 70% in new Poll say don’t impeach,” Trump wrote. “So ridiculous to even be talking about this subject when all of the crimes were committed by the other side. They can’t win the election fairly!”

When the president woke up Monday morning, he clearly still had 2020 and “fake polls” on his mind. In a pair of tweets, Trump brought attention to the huge crowds continuing to come to his rallies, one of the features of his 2016 campaign that pollsters downplayed.

“Big Rally tomorrow night in Orlando, Florida, looks to be setting records,” he tweeted early Monday. “We are building large movie screens outside to take care of everybody. Over 100,000 requests. Our Country is doing great, far beyond what the haters & losers thought possible — and it will only get better!”

After the 2016 election, with the vast majority of polls saying Hillary Clinton would pull off a victory, who in the world is paying attention to what polls say? Polls don’t really mean anything, as we all have learned over the last three years.

The left has done so much damage to the Democratic Party that no one wants anything to do with the far left policies they continually push down our throats. The election of Trump the first time around should have made that clear. It appears it didn’t, so the left needs yet another lesson, taught the old fashioned way.

Let’s hope Trump is victorious next year and the left finally gets that being radical isn’t going to win them elections, forcing them to move back to the center.