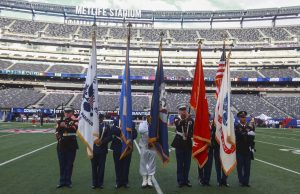 He went there last Sunday. Yes, he did. While other NFL team owners and Roger Goodell putzed about, wringing their hands and letting the inmates run the asylum, Jerry Jones took a stand for America and for the fans. Many, including President Trump, cheered. The response from players, the “news” media, and others on the left, however, has been as predictable as it is shrill.

It’s tempting for the average American who works every day trying to make ends meet to just dismiss the whole NFL brouhaha. Fans don’t have time for foolishness that interferes with precious leisure time. Others don’t care about the game anyway, so why should they pay attention to what goes on in the nation’s football stadiums? Good questions.

The answer is that the NFL protests are just the symptom of something more sinister. The childish displays of entitlement mentality we’ve seen since Poor Colin’s activist girlfriend first started pulling his strings point to a problem much bigger than a bunch of three hundred-pound millionaires poking out their bottom lips when they don’t get their way.

Before the Cowboys/Packers game last Sunday, Jerry Jones said, “If we are disrespecting the flag then we won’t play. Period. We’re going to respect the flag, and I’m going to create the perception of it.” After the game, he added, “We know that there is a serious debate in this country about those issues, but there is no question in my mind that the National Football League and the Dallas Cowboys are going to stand up for the flag. Just so we’re clear, the whole deal is political and incited by politics.”

To the unenlightened, those words look and sound a lot like leadership, especially with comments added two days later during Jones’s weekly radio show. In response to questions about his statemnt, he said, “I want [the players] to have the ammunition to tell anybody that asks them to do anything otherwise or demonstrate during that period of time, that ‘I don’t get to play if I do that.’ This is a workplace issue. I don’t want there to be any misunderstanding as to where I want the personnel of the Cowboys to be when we’re at the number one workplace we have, which is the field and the sideline on gameday. I want to do everybody a service, as I should in leading the team, and let’s be really clear about what our expectations are.”

In a matter of hours, ESPN host Michael Wilbon accused Jones of acting like a slaveowner. “The word that comes to my mind,” he said, “and I don’t care who doesn’t like me using it, is ‘plantation,’ The players are here to serve me; they will do what I want no matter how much I pay them. They are not equal to me. That’s what this says to me and to mine.”

The NAACP and Dallas City Council member John Wiley Price made the same comparison, insisting Jones has taken away his players’ First Amendment rights. They, along with most of those who think like they do, demonstrate why a free people must be governed by reason instead of emotion.

Jerry Jones said that his employees can’t destroy the organization he’s responsible for – along with the paychecks of hundreds of employees – by bringing their personal issues into the workplace. He said nothing about what they do away from AT&T Stadium. He put no new restrictions on what they protest or how they do it when they’re not wearing a Cowboys uniform. He even acknowledged their cause and agreed they could kneel before the anthem started. And yet, he’s just another slaveowner oppressing black Americans. That level of inanity from voting adults is scary stuff.

These dunderheads are mad that somebody finally had the testicular fortitude to call out their childishness. What would happen if store clerks and waitstaff confronted these same people with a pro-Trump message every time they went shopping or out to eat? It’s a pretty safe bet business would be overwhelmed by broken windows, boycotts, and lawsuits.

What parades across our TV screens, computers, and smartphones today is a society whose people can’t see far enough outside their own heads to even acknowledge a different point of view, much less appreciate or accept it. Instead of one nation under God, indivisible, with justice for all, we’ve become a collection of individuals who each believe that society is best served by giving me my way.

A lot of people seem to share that view. Who knows? Maybe they’re right. But, they’re the ones who think the best way to get people behind a cause is to spit in their faces and call them racists and worse when they object.

Even though it’s likely to get me accused of being intolerant and spreading hate speech, I think I’ll stick with the plain old good manners and common sense my mamma taught me.