Is Anyone Blaming Louis Farrakhan for the Tree of Life Shooting? 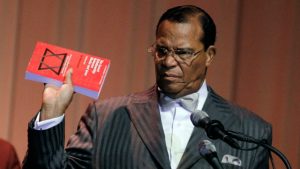 Last week, when a number of crude, homemade bombs were sent to several prominent Democrats like former President Barak Obama, Bill and Hillary Clinton, and George Soros, the media decided it was all the fault of Trump and his “violent rhetoric.”

One of the best examples they could draw upon of said violent rhetoric was the chant Trump led during many of his 2016 campaign rallies, “lock her up,” referring to his then-opponent Hillary Clinton.

Yes, this was two years ago, and yes, Trump and his supporters were calling for Hillary to be properly investigated, charged, tried, and sentenced rather than blown up by a mail bomb, but heck, that’s basically the same thing, right?

On Saturday, news broke of a horrific mass shooting that took place during worship at the Tree of Life synagogue in Philadelphia, and an open anti-semite who reportedly yelled “all Jews must die!” while opening fire on the congregants has been apprehended.

No one, it appears, save the folks over at Fox News, seems to be blaming Democrat and identity politician Louis Farrakhan, the leader of the Nation of Islam who just weeks ago referred to Jews as “termites” and is infamous for his rants against the “Satanic Jew”.

There were crickets from Democrats when Louis Farrakhan made his latest pronouncement of anti-Semitism just last week, comparing Jews to termites.

Facebook took down video of Farrakhan saying: “So when they talk about Farrakhan, call me a hater, call me anti-Semite. Stop it. I’m anti-Termite,” Twitter allowed the anti-Semitic comment to stand and continued giving it a platform.

If that’s not bad enough no one in the Democratic Party, nor many of our leading media personalities, felt it necessary to condemn Farrakhan’s hate speech.

Here are just a few of Farrakhan’s past statements demonizing Jewish people:

“Satanic Jews have infected the whole world with poison and deceit.”

“Powerful Jews are my enemy.”

“The Jews have control over those agencies of government. When you want something in this world, the Jew holds the door.”

“The Jews have been so bad at politics they lost half their population in the Holocaust. They thought they could trust in Hitler, and they helped him get the Third Reich on the road.”

“Of course, they [the Jews] have a very small number of people but they are the most powerful in the world, they have the power to do good and they have the power to do evil…Now what do the Jews do best? Well, they have been the best in finance that the world has ever known…They finance a lot of stuff in the world, and there’s nothing wrong with that, but they are not good politicians, they are the worst politicians because they don’t recognize really their friends and as well their enemies…”

These statements bear a striking resemblance to those found on the social media history of the man who has been apprehended in the heinous hate crime committed at the Tree of Life synagogue this weekend.

Hate is not unique to one political ideology, and neither is racism, nor insanity.

The Democrats have no right to claim any kind of moral high ground when it comes to antisemitism, but in reality, we should as Americans be able to unite against anyone, Farrakhan or this psychotic murderer, who demonizes an entire people group based on religion or ethnic background.

But until the Democrats are willing to point the finger at one of their own, it’s going to be pretty difficult to do that.