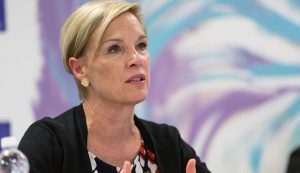 If you’re looking for the perfect gift to give those special folks in your life who happen to be liberal — bless their hearts — you might consider a dictionary with a few important, select words underlined for quick reference.

The whole point of such a gift is to help ensure that your buddies understand not only words, but the concept behind words, like “irony” for example.

Irony, as defined by Merriam-Webster, has several different definitions, but here’s a couple to whet your intellectual appetite:

1.) The use of words to express something other than and especially the opposite of the literal meaning. i.e. sarcasm.

2). Incongruity between the actual result of a sequence of events and the normal or expected result.

Here’s a quick lesson and illustration of what the concept of “irony” looks like when it happens in the real world. You know, the world outside of computers and phones? Yes, there is an actual “outside,” it’s not just a clever rumor.

Anyway, former Planned Parenthood head Cecil Richards is apparently now attempting to market herself as a “parenting expert.” Are you getting why this is ironic?

According to the Daily Wire, Richards recently took some time to put together her top ten tips for child rearing in an essay to help new parents raise those kids who survive Planned Parenthood.

The list can be found in her memoir in a section all about how she and her husband became “unexpectedly pregnant” and decided to throw caution to the wind and actually have the little tyke since there’s no such thing as a “good time to have a baby.”

Richards and her hubby decided that they’d just put a little effort into it and “figure it out” as they went along. That’s some sacrifice, isn’t it folks?

What makes the list so hilarious is that many of the suggestions she gives for raising kids are grounded in a very pro-life, traditional values kind of ideology. Like asking your family and friends for help, always being prepared for unexpected challenges, and even anticipating unplanned joy.

Here’s a little sample in her own words:

I know even as I write this that some people aren’t going to like it. But this is the truth: No matter how evolved you are, no matter your family makeup or the gender roles in your home, in any family with kids, someone has to remember birthdays, make lunches, keep track of doctor’s appointments, give pep talks, and coordinate after-school activities and holidays.

Coming from anyone else this wouldn’t be all that groundbreaking, but the fact this came from the head of Planned Parenthood — irony at its finest — is what gives this puppy some legs.

Anyway, this has been a lesson in the importance of understanding irony. Hope you enjoyed.