IRONIC: Dem. Kamala Harris Thinks Trump SCOTUS Pick Will Destroy the Constitution That She Doesn’t Even Like 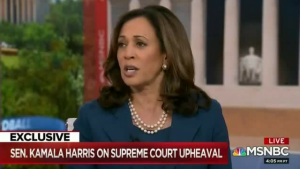 Sorry, I can’t help but create impromptu chants to mark this joyous day.

Anyway, I don’t really want to just kick people when they’re down, and I do appreciate what devastating news this is for liberals, especially those who genuinely believe their ideology truly is the best approach to achieving true liberty and equality (it’s not, but I’m trying to be nice.)

That being said, I have absolutely no qualms when it comes to pointing out the sheer hypocrisy coming from California Congresswoman Kamala Harris this morning, as she lamented that Trump’s new pick might destroy the Constitution…that she doesn’t even seem to believe in in the first place.

Speaking to MSNBC on Wednesday evening after the news of Justice Kennedy’s retirement hit Washington by storm, she said:

We’re looking at a destruction of the Consitution of the United States, as far as I can tell based on all the folks he’s been appointing thus far for lifetime appointments. We cannot relent, we’re going to have to fight to the end to make sure that we can do anything and everything that is possible to require this president to choose a consensus pick. Talk to Democrats.

A consensus pick, she explains, that would focus on “equality and fairness,” by which she most likely means “the issues that Democrats slap these words on to dress up cultural Marxist fascism.”

As opposed to, you know, a Justice that will fairly interpret the Constitution, which is pretty much the one job given to the SCOTUS.

The irony that Harris–who is pro-gun control and pro-abortion–thinks a conservative would “destroy the constitution” is rich, considering Democrats spent months whining about Trump’s last pick, Justice Niel Gorsuch, because of his originalist interpretation of the Constitution.

Democrats make a sport of seeing how distant their ideas can get from the Constitution, which they believe is a “living, changing” document, rather than the fundamental building blocks on which our Republic was built.

So why, exactly, is Harris so worried? It seems like Harris would be pretty happy if the Constitution was destroyed.