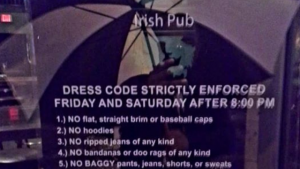 An Irish Pub in New York state is being slammed on social media for their supposedly “racist” dress code.

At first glace, it’s easy to guess why. The dress code bans things like flat-brimmed hats, Timbalands, and doo-rags.

So it’s bascially the equivalent of resurrecting Jim Crow segregation…except that it’s not.

See, if you have “everything is racist” glasses on, the styles that are most commonly associated with the preferred fashion choices of young African-American men jump out at you, but to label the whole thing racist has a number of problems.

First of all, take a look at the list:

First of all, I don’t know if the people who called this racist have been in public at all over the last ten years, but flat-brimmed hats are incredibly common among the youths of all colors these days, from skaters to wannabe thugs. It’s not unusual to see a 12-year-old girl wearing one. Like, 15 years ago Good Charlotte was wearing them, and that’s a pretty friggin’ caucasian band if I remember correctly.

Also, who in their right mind thinks hoodies are a black thing? Seriously, people. Hoodies are one of the most staple item in America. Just stop.

The bar also bans ripped pants, JEANS, shorts, or sweats. The preferred Walmart attire of half my majority-white Bible belt town just got nixed from this bar right there. Not to mention those $600 ripped jeans they peddle to white chicks at department stores.

The addition of camo to the list just banned every white male south of the Mason-Dixon line between the months of September and March, and almost no one else.

Need we go on?

This bar may have a very snobby dress code, but if its racist, its also classist, agist, and anti-redneck too.

Maybe we can all agree it just excludes regular people and grab a beer together some place that won’t kick us out for our flat-brimmed hats or our Realtree.