Irish Justice: Pedophiles Arrested After Being Found Tied to A Bench Covered in Cement 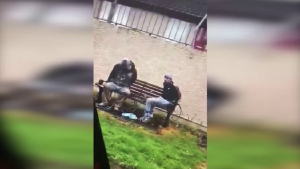 Now, the right to trial by jury is a fundamental aspect of what makes our country so great.

So we certainly cannot condone the vigilante justice two Irish pedophiles recently experienced at the hands of an angry mob.

But if you can’t appreciate why a mob of Irishmen tied two known fugitive child molesters to a bench, beat them, and doused them with paint and cement, you might want to check for a pulse.

The Independent has the story:

Two notorious paedophiles who were hiding out in Co Donegal last week have been arrested in the North.

But on Saturday night the two were caught by the PSNI in Newry after an incident during which they were set upon in the Mullaghbawn area, Co Armagh.

It appears the men may have been attacked before being doused in cement and paint and tied to a public bench.

An angry mob shouted at the men before they were arrested by detectives.

The aftermath of the incident, which was witnessed by 100 people, was captured in this video. The audio is hard to make out as it’s mostly just bleeped-out Irish cussing, but you’ll get the idea:

The pair had been on the run over the weekend, sparking heightened concern in the areas of Armagh, Newry, and Donegal, particularly when the vehicle they had been traveling in was found abandoned.

They were considered by police to be “high-risk sex offenders” and had been approaching children in a sort of sick double-act crime spree.

Both men had multiple previous convictions of sexual harassment, sexual assault, and physical assault, as well as repeated violations of the conditions of their release from their respective stints in prison, according to the Independent.

On Saturday night, however, some very, uh, concerned community members in Mullaghbawn found the pair and took justice into their own hands, clearly.

Now, once again, we certainly can’t let vigilante mobs go around beating whomever they like, but it still seems to be a fitting end to a life of disgusting crime! Let’s hope the Irish courts lock these two scumbags up and throw away the key–there’s no reason these men should have ever been walking the streets again in the first place!