Iran Points Finger At America And Jews For Coronavirus 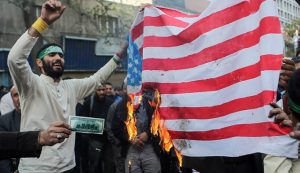 The fine people who run the country of Iran have figured out who is to blame for all of this coronavirus stuff happening all over the world, which is a huge relief because now we can shout angry sentiments at these individuals and make them feel really bad about everything.

Apparently, according to these bright minds, this whole thing is because of the Jews. Oh, and America, of course. Can’t leave us out. After all, we’re the source of all that’s evil, right?

Hope you all caught the sarcasm, I was laying it on pretty thick.

Here’s more on this insanity from The Daily Wire:

The despotic theocratic regime in Iran, unsurprisingly, is blaming America and the Jews for the coronavirus outbreak in Iran that has now claimed the life of the former Iranian ambassador to Syria as well as an adviser to Iranian Supreme Leader Ayatollah Ali Khameini.

The Jerusalem Post reports, “Over the last several days, Iran has pushed several reports claiming that ‘Zionists’ were behind the coronavirus. Press TV also quoted the same website that was at the center of an antisemitic article from 2017 that claimed “America’s Jews are driving America’s wars.”

The Post added, “On March 5, Press TV claimed that ‘Zionist elements developed a deadlier strain of coronavirus against Iran.’ Although the report claimed to reference a foreign ‘academic,’ it fits the pattern of Iran using foreign experts to give the regime’s own views a patina of authority.

Today, I am formally announcing my Administration’s plan to designate Iran’s Islamic Revolutionary Guard Corps (IRGC), including its Qods Force, as a Foreign Terrorist Organization (FTO) under Section 219 of the Immigration and Nationality Act. This unprecedented step, led by the Department of State, recognizes the reality that Iran is not only a State Sponsor of Terrorism, but that the IRGC actively participates in, finances, and promotes terrorism as a tool of statecraft. The IRGC is the Iranian government’s primary means of directing and implementing its global terrorist campaign.

Apparently, the U.S. is doing some sort of biological warfare, according to Press TV, which then went on to cite an article that also blames Israel and says the CIA and Israel are working together.

Guess that means Iran has officially joined the tinfoil hat crowd. Do they get some sort of really cool membership card they can put in their wallets? Maybe a t-shirt?

There are lots of folks who think this virus might be a bioweapon of some sort, and it’s not beyond the realm of possibility to be that, however, it seems sort of unlikely at this point.

Regardless, Iran is using this as an opportunity to justify their spewing anti-Semitism and hatred, politicizing it for their own personal gain. Pretty gross.