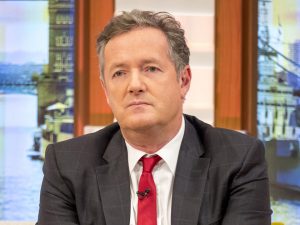 After an absurd number of complaints against Piers Morgan — we’re talking tens of thousands — after he made comments critical of Meghan Markle, UK media regulator Ofcom is now launching an investigation into him.

Variety is reporting that Ofcom “launched an investigation after more than 41,000 people wrote in to complain about ITV’s ‘Good Morning Britain’ host Piers Morgan’s comments on Meghan Markle.”

Apparently you can’t criticize folks anymore for saying silly things that may or may not be true. This cancel culture nonsense is out of control.

“We have launched an investigation into Monday’s episode of ‘Good Morning Britain’ under our harm and offence rules,” confirmed an Ofcom spokesperson.

Morgan said on-air that he “didn’t believe a word” of what Markle said during her sit-down interview, which aired on Sunday night, with husband Prince Harry and host Oprah Winfrey.

Markle and Prince Harry most notably claimed that Markle was a victim of racism at Buckingham Palace from the British tabloids, and that a member of the royal family, whom the pair did not name, expressed concern over the color of their son Archie’s skin while Markle was pregnant.

“I could see the way it is already playing in America and around the world. This is a caricature, a portrait of our monarchy and Royal Family which I think is contemptible,” Morgan said. “Okay. Let’s have the names. Who did she go to? What did they say to you? I’m sorry; I don’t believe a word she says, Meghan Markle. I wouldn’t believe it if she read me the weather report.”

Markle herself filed a complaint against Morgan with ITV, which produces “Good Morning Britain,” over his criticism.

Again, this cancel culture stuff is just plain stupid. So the man has an opinion about something and openly expresses that opinion and because it hurts someone’s feelings, he’s about to get in trouble?

What in the world has happened to people? This is absurd. And a violation of free speech.

“On Monday, I said I didn’t believe Meghan Markle in her Oprah interview,” Morgan went on to say. “I’ve had time to reflect on this opinion, and I still don’t. If you did, OK. Freedom of speech is a hill I’m happy to die on. Thanks for all the love, and hate. I’m off to spend more time with my opinions.”