Introducing, the Top Democrat Contender for 2020: “None of the Above” 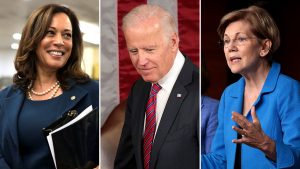 There has been a lot of chatter among conservatives that the Democrats have no one to run for 2020.

This may be due to the fact that the Democrats have no one to run for 2020.

Sure, there’s the Bern, Fauxohontas, Sparticas, Creepy Uncle Joe, and that loud lady from California who’s like a black, less charismatic Hillary Clinton.

And don’t forget Hillary Clinton, who refuses to rule a 2020 run out.

A survey conducted by The Hill recently revealed that the majority of Democrats would prefer “none of the above” when presented with the options of Bernie Sanders, Elizabeth Warren, Hillary Clinton, Joe Biden, Cory Booker, or Kamala Harris.

The survey, conducted among 680 registered voters who identified themselves as Democrats or independents, found that “none of the above” was the most popular choice among potential 2020 challengers to President Trump.

Twenty-five percent of respondents said Biden would be their preferred nominee. Sanders, who ran in the Democratic presidential primary in 2016, came in second with 18 percent.

Twelve percent of the independents and Democrats surveyed picked Clinton, Sanders’s one-time presidential rival, who signaled a willingness to run again, saying in an October interviewer that she would still “like to be president.”

Other candidates attracted even less support. Harris, Bloomberg and Warren were each the top choice for just 4 percent of respondents.

So, what does this all mean?

Again…the Democrats have no one to run in 2020. Certainly, no one that can beat Trump, and apparently hardly anyone that could even secure the party nomination.

I don’t know whether to say “ouch” or “yikes”, but either way…Dems are in trouble.