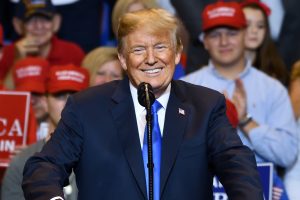 In the latest big development on impending impeachment proceedings, the Trump administration announced on Tuesday that it will soon release an inspector general report on the whistleblower complaint demonstrating clear bias in favor of one of Trump’s political rivals.

“A senior Trump administration official told Fox News late Tuesday that the administration will release a document showing the intelligence community inspector general found the whistleblower who leveled an explosive accusation against President Trump concerning his talks with Ukraine had ‘political bias’ in favor of ‘a rival candidate’ of the president,” Fox News reported. “The official did not identify the name of the rival candidate. Separately, a senior administration official told Fox News the White House has been working as quickly as it can to release to Congress the whistleblower complaint involving President Trump’s conversations with the leader of Ukraine, as long as it’s legally possible.”

This is almost as fun as waiting for the next Star Wars movie. Who will the unnamed “rival candidate” be? Mr. Handsy, or Mrs. Disappearing Emails? I wonder!

The announcement came just hours after Nancy Pelosi, who had resisted cries for impeachment from her party up until now, announced that Dems were launching a formal impeachment inquiry into the president over a phone call that he had with a Ukrainian leader.

“Therefore today, I’m announcing the House of Representatives moving forward with an official impeachment inquiry,” Pelosi said. “I’m directing our six committees to proceed with their investigations under that umbrella of impeachment inquiry. The President must be held accountable. No one is above the law.”

“The White House is preparing to release to Congress by the end of the week both the whistleblower complaint and the Inspector General report that are at the center of House Democrats’ impeachment inquiry,” Politico reported. “The move shows the level of seriousness with which the administration is now approaching the House’s new impeachment proceedings.”

The plot got a little bit thicker after The Federalist reported that the attorney for the whistleblower has previously worked for Hillary Clinton and Chuck Schumer, which may remove any question as to just who the unnamed political rival may be.

Trump responded to the news in his usual way:

This is going to be fun to watch. Stay tuned for updates as this story unfolds.