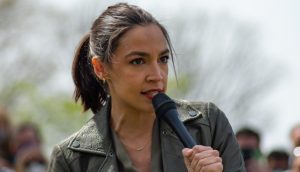 Members of “The Squad” — Democratic Reps. Alexandria Ocasio-Cortez, Illhan Omar, Rashida Tlaib, and Ayanna Pressley, and newest member Cori Bush– lost their collective minds and launched an all out assault on Sen. Joe Manchin, also a Democrat, for making the announcement that he would not be supporting President Joe Biden’s massive $1.75 trillion “Build Back Better” plan.

It seems Omar was the most vocal of the bunch, referring to Manchin’s stance on the legislation as “bulls***.”

“I cannot vote to continue with this piece of legislation. I just can’t. I’ve tried everything humanly possible. I can’t get there,” Manchin stated during an interview on Fox News. “This is a no on this legislation. I have tried everything I know to do. And the president has worked diligently. He’s been wonderful to work with. He knows I’ve had concerns and the problems I’ve had and, you know, the thing that we should all be directing our attention towards, the variant, a COVID that we have coming back at us in so many different aspects in different ways, it’s affecting our lives again.”

Omar really got heated, saying, “we all knew that Sen. Manchin couldn’t be trusted.”

Then AOC decided to get in on the action, writing on Twitter, “Our entire democracy is on the line. “We, as always, are here to fight for this agenda. What matters most to us is that it gets done.”

Well, first off AOC, we don’t have a democracy. Democracy is mob rule. We have a republic. So yeah, learn the difference.

Then AOC really went off the deep end saying, “We cannot just shrug our shoulders and accept this as some Charlie Brown moment.”

Tlaib also weighed in, saying on Twitter: “It shouldn’t surprise anyone that Manchin goes on Fox to kill BBB — he’s been promising to do it for months, and some folks didn’t want to believe him.” She said that after another bill passed, “We gave up our leverage … and [Manchin] got the fossil fuel subsidies he wanted.”

And Bush had some words for Manchin, too. “Honestly, I’m frustrated with every Democrat who agreed to tie the fate of our most vulnerable communities to the corporatist ego of one Senator,” she wrote on Twitter. “No one should have backed out of our initial strategy that would have kept Build Back Better alive.”

Wow. These ladies wasted no time getting shrill did they?

Maybe they just need to calm down and stop overreacting.