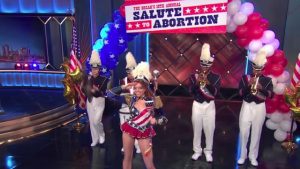 Aw, what a shame. And just a month after she had her patriotic salute to abortion!

Michelle Wolf, who you may remember as the lady who, earlier this year, brutally mocked Sarah Huckabee Sanders at the White House Correspondents’ Dinner and didn’t even have the decency to make it funny, has now been canceled from Netflix.

Shortly after the WHCD fiasco, Wolf, who had previously worked as a writer for The Daily Show and The Late Show, launched her own show on Netflix where she bragged that viewers could “expect the types of jokes my former bosses would tell me we couldn’t do on TV,” according to The Daily Wire.

“We’re thrilled to be working with Michelle, a gifted writer and performer with a singular voice,” said Netflix’s VP of Content Bela Bajaria at the time.

Well, it looks like the short-lived dream is over, according to The Hollywood Reporter:

Despite plentiful buzz following her controversial turn as this year’s White House Correspondents’ Dinner emcee, Wolf’s late-night entry failed to garner the kind of viewership that warrants a second season at the streaming giant.

I guess that’s what happens when you rely more on controversy than actual talent.

This problem is not unique to Wolf, who joins a growing group of progressive performers who get so caught up in their politics, they forget that what usually cements an artist’s popularity is, you know, a lot of people who enjoy seeing them perform.

From Sarah Silverman to Samantha Bee to Kathy Griffin to Amy Schumer, today’s comediennes get so wrapped up in identity politics they set aside what little talent they may have originally had to lecture Americans about political correctness, go on unhinged rants about the President, or simply make disgusting jokes about the murder of the unborn.

And very inconveniently for these ladies, audiences apparently just don’t resonate with this politically-charged brand of humor.