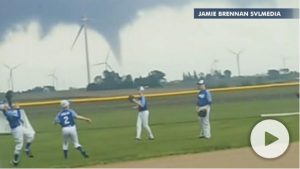 A new video is making its way across the Internet and it’s easy to see why it’s going viral. It features a group of seemingly fearless little leaguers warming up before a game as a menacing looking tornado approaches.

This is both incredible and absolutely terrifying at the same time. What in the world was the coach thinking by not having these kids take cover immediately?

The team from Montezuma, Iowa, were warming up on the field before a game last week and a parent caught a tornado swirling in the distance.

“The tornado appeared very quickly and also disappeared fairly quickly as well,” the parent, Jamie Brennan, told the Des Moines Register on Thursday. “The game before ours was canceled due to potential tornadoes. By the time it was our turn, everyone thought the storm had passed. When they were warming up, it was clear outside — there was no lightning, rain, wind or anything.”

The twister appeared as a spate of severe weather clobbered the Midwest. The National Weather Service confirmed that a tornado did touch down near Montezuma last week, according to the Des Moines Register. The tornado injured one person.

Brennan went on to say that though the video looks careless, there were lots of people there and everyone was calm and that if he felt like it was a dangerous situation he would have taken his child off the field.

Either this guy is a total tough guy or he’s absolutely bonkers. Regardless, it’s a good thing everyone got through this situation unscathed, because things could’ve gone real bad, real quick.

Tornadoes are nothing to mess. Just ask the unfortunate souls in the Dayton, Ohio area who got slammed by tornadoes that did some severe damage and left one person dead.

Glad this story has a happy ending.