In Spite of All the Drama, New Poll Suggests That Trump. Is. Killing. It. 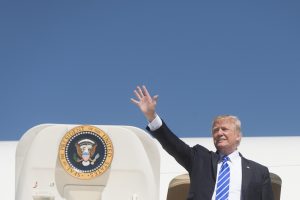 If your only impression of the President came from cable news, it would be easy to conclude that everyone other than a few over-zealous Fox opinion hosts absolutely hates the President.

And also that he is a Russian stooge who wants to turn America into his dystopic mash-up of The Handmaid’s Tale vs The Birth of a Nation.

That is because, well, quite a few people absolutely do hate the President, namely, the mainstream media and the Democratic politicians from whom the pundits extract their views and embellish upon liberally. They work day and night to create the impression that the President is an absolutely horrendous person and illegitimate president.

You know this, I know this, and, inconveniently for Trump’s political enemies, the majority of his supporters know this.

The hatred for Trump seems to have continued to drive more supporters into his arms considering how hysterical the criticism of this rather moderate but gregarious President really is.

Well, there is also his job performance, which just so happens to be, well, actually pretty good.

A lot of people voted for Trump for the sole purpose of keeping Hillary Clinton, arguably the most unpopular presidential candidate in our nation’s history, from winning, but many of these same people have been quite pleasantly surprised to see Trump actually work pretty hard in office to enact a surprisingly conservative agenda.

His job performance hasn’t been perfect and there’s been an endless barrage of bumps and roadblocks along the way, but at the end of the day, the American public is pretty pleased with how well he’s doing.

According to a new poll from Zogby, the President is, well, as the Daily Wire puts it, “killing it.”

According to a new poll from Zogby Analytics, President Trump is killing it.

His job approval has jumped over 50% to 51% to be exact, which is the highest it has been during his time in office.

This is higher than former President Barack Obama’s approval rating at the same time during his presidency, which was 48%.

This, at a period of time when pundits on the right and the left are sounding the alarm over trade concerns with China and the Washington establishment continues to bang the Russia collusion drum.

What would his approval rating be if there wasn’t a relentless attempt to undermine his presidency and damage his public image?

Zogby wrote, “President Trump’s job approval rating has seen a post Mueller report boost! We called it a few weeks ago. But that’s not the complete story as to why the president has reached a peak in his job approval rating. Trump is also riding high on positive economic news-a record high stock market, low unemployment, and solid GDP growth at home.”

To quote Clinton adviser James Carville from decades ago, at the end of the day, it’s the economy, stupid.

Trump was elected by Americans who cared less about identity politics and the culture war then they did about cold, hard cash in their pockets and economic security for their families.

Zogby ultimately attributes Trump’s rise in popularity to the booming economy and historic low unemployment rates, which is quite telling.

Trump won on the economy in 2016, and if the Democrats continue to advocate for the complete destruction of the economy as mapped out by a 29-year-old bartender who literally just discovered the garbage disposal, he’s going to win on the economy again in 2020.

Because, well, America just might be getting pretty great again