In Just Five Months, Border Patrol Has Seized More Fentanyl Than In All Of 2020 Amid Overdose Surge 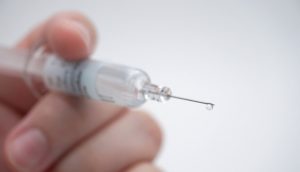 The United States Customs and Border Protection agency is now saying that there is a massive surge in fentanyl that is coming across the border into the United States, revealing they have seized more of the narcotic in the first several months of 2021 than they did during the entire year of 2020.

“Customs and Border Protection seized more fentanyl so far in 2021 than all of 2020,” ABC News said in a new report on Tuesday. “As of April, 6,494 pounds of fentanyl were seized by authorities at the border, compared to 4,776 pounds in all of 2020. In fact, fentanyl seizures have been increasing since 2018.”

“Fentanyl is an incredibly potent opioid that is 50-100 times stronger than morphine,” an expert stated during an interview with ABC News.

The use of Fentanyl and abuse of the substance surged during the beginning of the COVID-19 pandemic. Overdoses have continued to surge throughout the U.S. despite lockdowns beginning to ease up.

“CBP’s Office of Field Operations has seen a slight increase in narcotic seizures at its southern border ports of entry in fiscal year 2021,” the agency said in a statement. “As cross-border travel shifted to essential-travel only, criminal organizations shifted their operations as well. CBP has seen an increase in seizures amongst U.S. citizens and in the commercial environment as both demographics are exempt from the travel restrictions.”

According to National Public Radio, overdose deaths surged during the COVID-19 pandemic, especially during pandemic-related lockdowns, when most Americans were forbidden to leave their homes for more than essential travel. In previous years, around 70,000 Americans died of drug overdoses. Around 90,000 Americans died of overdoses in 2020, and many of those deaths happened because of fentanyl.

“According to preliminary figures released earlier this month by the Centers for Disease Control and Prevention, synthetic opioid fatalities rose by an unprecedented 55% during the twelve months ending in September 2020,” NPR said in a recent report.

“Deaths from methamphetamines and other stimulants also surged by roughly 46%,” the outlet went on to say,” adding that many of those deaths are “linked to fentanyl contamination,” where users did not realize they were taking the super powerful drug because it was laced into another substance.

It’s probably going to be a long, long time before we know the actual number of pandemic-era overdose deaths, but regardless, we know it’s very high, which puts a spotlight on one of the unintended consequences of doing lockdowns and other tyrannical measures that were used to try and curb the spread of the coronavirus.

There’s always someone, or a group of people, who fall through the cracks.