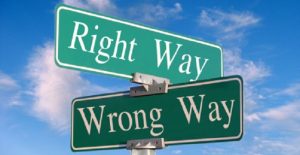 Today’s most common and powerful tactic of the leftist liberals is to cry, “Stop trying to force your puritanical, dark age morality on me.” And then by lobbying, legislating, and loud protesting, they attempt to force their immorality on those of us who believe that there are absolute standards of morality.

The unending litany of indignant protests from the “immorality-forcers” shout:  “Who are you to judge that person?” “Don’t you understand that you can do whatever you want as long as it doesn’t hurt anybody?” “Everything is relative.” “What’s true for you may not be true for me.”

One man in speaking to a church leader said, “I think that anybody who holds to absolute truth is oppressive, intoler­ant, self-righteous, rigid, close-minded, and an arrogant know-it-all.”

There was a banner seen hanging between two trees in a local park, stating, “It isn’t wrong to think you’re right, but it isn’t right to think others are wrong.” Nice sentiment, isn’t it? What it is saying is that it isn’t wrong to have to personal con­victions or opinions about what’s right and wrong; it’s just not right to judge the opinions of others. After all, what gives you the right say that another person’s actions are wrong? This philosophy of life is not only false, but unlivable.

Matt Walsh, a columnist for The Blaze, writes about the numerous responses he got after posting an article on the Masterpiece Cake Shop v. Colorado Civil Rights Commission lawsuit. This lawsuit concerns an attempt to compel a Christian to make a cake for a homosexual wedding, no matter how inconvenient it may be to drive 18 and a half feet to the next bakery and get a cake from someone who isn’t a devout Christian.

Matt posts one person’s response to his article: “If you want to be a bigot, that’s your issue. But you can’t FORCE your “morality” on OTHER PEOPLE. I have a RIGHT to live my life as I see fit. If I want to marry a person I love, I have a RIGHT to do that and to have the same kind of wedding that everyone else has. Yes that includes a cake. You can think what you want and say whatever bigoted sh*t you want in your backwards churches, but stop trying to FORCE it on everyone else.”

“It’s truly amazing that they’ve been able to frame the argument this way. Somehow, they succeeded in redefining “force” as “refusing to do what we tell you.” They were greedy in their lie, and it paid off. Rather than being satisfied with shoving their ideology down our throats and pretending they haven’t shoved it down our throats, they went for the home run and claimed that we’re shoving our beliefs down their throats by not swallowing whatever crap they feed us. And they got away with it. Many Christians have bowed down and apologized for not being quite submissive enough, and now they lay their like beaten dogs, awaiting instructions from their cultural overlords.

“So it bears repeating for the benefit of those who haven’t quite noticed how this works: when a leftist complains that you’re “forcing your morality,” he’s really just upset that you’ve resisted his attempts to force his immorality on you. “Don’t force your morality,” translated into traditional English, means “lie down, shut up, and let me stomp you into dust.” If you let out a peep of protest while he presses his boot onto your neck, he’ll cry that you’re persecuting him, and then he’ll press harder. If you dodge his punches while he swings for your face, he’ll whine that you’ve enslaved him under a theocracy, and then he’ll swing faster.

“You have the right to be still and take the abuse. If you want more rights, you better get a new belief system. That’s the American system in the modern age.”

“Immorality-forcing” is seen most dramatically and dangerously in the push for instituting and enforcing federal “hate crimes” legislation. The aim of this activist tool is to silence traditional views on human sexuality and sexual morality. Similar laws have already been used around the world, and even right here at home, to persecute Christians and other traditionalists. For example, in 2004, eleven Christians were arrested in Philadelphia and charged with a “hate crime” for merely preaching the Bible at a public homosexual street festival. They could have served up to 47 years in prison.

More recently, a Christian photographer was dragged before the New Mexico Human Rights Division for refusing to photograph a “commitment ceremony” for a lesbian couple because lesbian behavior is inconsistent with Christianity.

Morality-forcing is unavoidable. The question is whose morality or immorality. Remember, all law and legislation is an attempt to force someone’s morality upon others. Absolutes are unavoidable.

Jesus said, “You shall know the truth and the truth shall set you free.” God’s purpose for you is freedom. His method of freedom is truth. His revelation of truth is Jesus Christ. Freedom is not doing what you want to do, but what you ought to do for the glory of God and the good of others.

Wade Trimmer has been in full-time Christian service since 1971, thirty-five of those years as a senior pastor. He pastored Grace Fellowship of Augusta for 30 of those years.
In 2008, Pastor Wade formed Training for Reigning Institute of Disciple-making, a non-profit organization, for the purpose of equipping leaders, especially in Third World countries in being more effective in carrying out the Great Commission The past 9 years have taken Pastor Wade outside the USA to more than 25 different nations.
He is the author of 46 books, a conference speaker and leader of international mission’s training. He is married to Anne and they have three grown children, five grandchildren, and five great grandchildren. They are members of Grace Fellowship of Augusta, Georgia and make their home in North Augusta, South Carolina.
(Visit our website:). Training for Reigning Institute