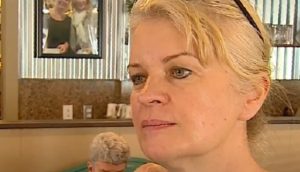 A Polish immigrant who lives in the state of Michigan has been tossed in jail by local authorities after she refused to comply with a lockdown order that she says are unconstitutional.

Supporters for the woman and her righteous cause are coming out of the woodwork to defend her, holding rallies outside the jailhouse and then donating a ton of money to a GoFundMe account that’s been set up for her to assist with financial difficulties.

Fox News host Tucker Carlson reported Friday that Marlena Pavlos-Hackney, the owner of Marlena’s Bistro and Pizzeria, was jailed for refusing to close her business.

“Marlena Pavlos-Hackney is in jail, she was arrested very early this morning before 6 a.m by police, taken away in ankle shackles and wrist cuffs  … they grabbed her and they sent her away for longer than people who commit gun crimes in Detroit get,” Carlson said during his program.

“We’re told she will be in jail for 93 days unless she pays a $35,000 fine and the Michigan Board of Health deems it safe for her to be released. She’s not going to pay; she shouldn’t pay,” the Fox News host continued.

“The county judge who did this, Rosemarie Aquilina, defended the arrest saying that Pavlos-Hackney ‘has put the community at risk we’re in the middle of a pandemic,” Carlson said. “By the way, they presented zero evidence that she had any role in the pandemic — none, no scientific evidence whatsoever. But they want you to know that defiance is the real crime.”

According to a report from MLive, the Polish immigrant refused to close her bistro following a November edict banning indoor dining. Pavlos-Hackney defiantly posted a sign outside her business emphasizing that she was staying open.

“Welcome. We are a Constitutionally Compliant Business. We are not infringing on anyone’s inalienable rights. By law, we do not follow any of the governor’s, mayor’s, health department’s, or other government agency orders or suggestions pertaining to social distancing or mask-wearing,” the sign said.

Pavlos-Hackney continued to keep her doors open and refused to comply with “social distancing” and mask measures, leading to fees, fines, and the suspension of her food license in late January.

“I’m not afraid. I’m fighting for freedom in America,” Pavlos-Hackney said to the news outlet. The business owner also refused to hand herself over to the authorities.

Supporters started gathering outside the county jail on Friday. One of the folks who attended the event, Rick Martin, offered to help Pavlos-Hackney due to her not being able to communicate all that well with the English language.

Speaking of Pavlos Hackney he said, “This woman has ultimate faith in God and she knows what’s right.”

The judge apparently ordered Martin to be arrested for his alleged “unauthorized law practice” while trying to help Pavlos-Hackney.

Even though the Polish woman was locked up in the county jail, many of the individuals who support her showed up to her restaurant for breakfast. These folks have also contributed a stunning $260,000 to help her out.

The GoFundMe account was started by a man named John Rocha who posted the details of Pavlos-Hackney’s escape from Communism and her battle with the tyrannical authorities of Michigan:

In 1983, Marlena escaped Communism of her home country Poland for the Freedoms and individual rights of These United States of America. She became a citizen in 1992 and decided to open her business, nestled in Holland, Michigan “Marlena’s Bistro and Pizzeria.”

Marlena is the pure definition of the American Dream and she exudes that everyday, grateful to be part of a country that upholds individual liberty and freedoms over totalitarianism and authoritarianism. Free from a Communist country her and her business thrived!

Then came 2020, Unconstitutional lockdowns from Michigan’s Governor Whitmer and her draconian lackeys at the Michigan Department of Health and Human Services. Together, with no data presented, in defiance of the Constitution and the oath they took to uphold it, they shut down ALL restaurants.

Marlena had seen these edicts before and refused to lose everything she worked her entire life for only to live in a country that started to look like Communist Poland. She would remain open in defiance of tyranny and well within her protected Constitutional rights. But the government had other plans.

Like most authoritarian governments, the Health Department tried to shut her down with fines and fees. When she stood her ground, they revoked her license to operate a restaurant. Marlena is would not be deterred and like the Founding Fathers before her, refused to comply: She would continue to serve the patriots of her community.

This last week, in a court ordered Zoom appearance, without Constitutionally protected representation, the judge levied a fine and ordered an arrest warrant for Marlena. Finally, under tremendous stress and pressure, Marlena did what she knew was right: She continued to serve her community even under the possibility of arrest.

Now, she needs our help. Marlena has given me the blessing to help run this fundraiser for her as we met this week to go over this plan. The funds will be distributed to her and her restaurant to help offset the cost of running the business during this pandemic! Please Donate and Share this GoFundMe Page set up to help offset the mounting legal fees Marlena continues to incur daily, and to send a message to wanna be dictators everywhere: America is the Land of the Free and the Home of the Brave, and together with like-minded Patriots like YOU, we can overcome and beat back Socialism! Be like Marlena. Be an AMERICAN PATRIOT! Donate TODAY!

This, ladies and gentlemen, is what a true patriot looks like. No one knows what Communism looks like more than someone who had to live through it. Pavlos-Hackney knows it all too well. This is why we must continue to fight back through the appropriate channels and stop big government from destroying our country and our freedoms under the guise of safety and security.