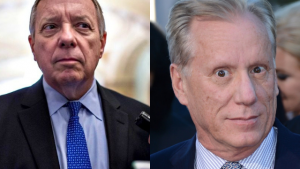 While the Democrats consistently bang the drum of gun control, there is no distinct correlation between gun control and reduced firearm homicide rates. In fact, in several examples, cities with strict gun provisions often see high rates of firearm homicide as well.

If we assert that Democratic gun control measures may actually lead to higher rates of gun homicide, the city of Chicago is the petri dish.

Yet, somehow, Senator Dick Durbin completely failed to see the irony when he directly blamed the GOP for Chicago’s gun violence rates when he tweeted about the tragic shooting of a 19-year-old anti-violence activist on the streets of Chicago.

This is heartbreaking. Chicago has lost far too many aspiring young people to senseless gun violence. When will Republicans in Congress finally decide to act? https://t.co/4dCk5YODwZ

Durbin, who is, to be clear, a Senator from Illinois, seems to have failed to pay attention to which party has been drafting policy in Chicago for the last eight decades.

Notorious Twitter owner-of-libs James Woods stepped in to clear things up for Durbin:

Dear Nimrod, #Chicago has been ruled by #Democrats for 87 years. It has the strictest gun control laws in America. Stop talking. You are an embarrassment. https://t.co/uTKYcXnXSZ

Oh, wow that is awkward.

The sad thing is, Democrat voters have been so conditioned to connect the fact that firearms are legal and easy to purchase in many (freedom-lovin’) states across the nation with the fact that there are high firearm homicide rates in other states.

Non-law-abiding gun owners, on the other hand, are exactly the sort of demographic that Democrat voters will turn around and demand shorter sentences for.

You can’t simultaneously blame law-abiding gun owners for the gun violence of criminals and on the very same platform, rally to remove the blame from criminals who choose to commit crimes with guns.

Well, I suppose you can, but that just makes you a Democrat.