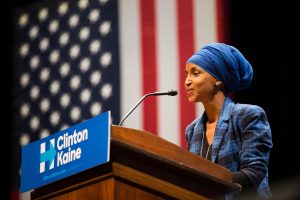 I’m sorry, but this chick behaves like a complete brat.

She’s been rambling away on Twitter about how corrupt and untrustworthy anyone who supports Israel is, refusing to shy away from obvious antisemitic tropes to the point that the Democrats actually tried on a backbone for about five seconds in drafting a resolution condemning her comments (don’t worry, they watered it down beyond the point of recognition before actually voting on the darn thing).

But as soon as people criticize her right back, she absolutely loses it.

There’s a reason she and AOC are such good friends. They both think being the Intersectional Princesses of Congress mean they can say whatever outrageous, outlandish things they want to and hide behind their victimhood points.

Sorry ladies, ya can’t. You want to talk like big girls, you’ve got to be able to take what you keep dishing out.

Over the weekend, everyone from Mike Pence to Israeli Prime Minister Benjamin Netanyahu and even House Majority Leader Nancy Pelosi took aim at Omar’s past comments about US support for Israeli at a conference for one of Omar’s favorite targets, The American-Israeli Political Action Committee.

“Ladies and gentlemen, in recent weeks, we’ve heard a lot about the rise of forces who want to pull America and Israel apart,” Netanyahu said. “So I can tell you one thing. I guarantee you this. They will fail. They will fail.”

“Those who seek to defame this great organization AIPAC, those who seek to undermine American support for Israel, they must be confronted,” Netanyahu continued. “Despite what they claim, they do not merely criticize the policies of Israel’s government. G-d I’m used to that. That happens every five minutes. They do something else. They spew venom that has long been directed at the Jewish people.”

“So I have a message to all the anti-Semites out there … the Jewish people do not bow down,” Netanyahu added. “We stand up. We fight. And we win.”

“My friends, ladies and gentlemen, some people will just never get it. They’ll never understand why the vast majority of Americans – Jews and non-Jews alike – support Israel,” Netanyahu concluded in the portion of his speech talking about anti-Semitism. “Take it from this Benjamin, it’s not about the Benjamins. The reason the people of America support Israel is not because they want our money, it’s because they share our values.”

Nancy Pelosi was only slightly less scathing (although she’s certainly failed to condemn Omar in the past):

When Pelosi spoke, she also took shots at Omar: “In our democratic societies, we should welcome legitimate debate about how best to honor our values and to advance our priorities without questioning loyalty or patriotism.”

“This month, the full House came together to condemn the anti-Semitic myth of dual loyalty, and all forms of bigotry, with a resolution that ‘rejects the perpetuation of anti-Semitic stereotypes in the United States and around the world, including the pernicious myth of dual loyalty and foreign allegiance, especially in the context of support for the United States-Israel alliance,'” Pelosi said. “I simply declare to be anti-Semitic is to be anti-American. It has no place in our country.”

Pelosi later took a veiled shot at the three freshmen Democrats when she said that there were “signs” of anti-Semitism “in our own country.”

“We must also be vigilant against bigoted or dangerous ideologies masquerading as policy, and that includes BDS,” Pelosi said.

“I simply declare to be anti-Semitic is to be anti-American. It has no place in our country.”

“We must also vigilant against bigoted or dangerous ideologies masquerading as policy and that includes BDS” pic.twitter.com/w0wTBRAmGN

Omar, who obviously believes that only she has the right to publically slam those with whom she disagrees ideologically, said in response to Pelosi’s comments, “A condemnation for people that want to exercise their First Amendment rights is beneath any leader, and I hope that we find a better use of language when we are trying to speak as members of Congress that are sworn to protect the Constitution.”

Sorry, lady. The First Amendment doesn’t guarantee the right to be agreed with.

She also took shots at Netanyahu, who she obviously believes has no right to defend his own friggin’ country. She was destroyed, however, by Jerusalem Post contributing editor Lahav Harkov:

He didn’t mention your name and made one oblique reference in a 12-minute speech. Can I recommend getting over yourself? https://t.co/SKEsDpZzuj

I should be sleeping but there is so much nonsense in this thread, so let’s break it down. Netanyahu mentioned Pittsburgh more explicitly than he mentioned you. https://t.co/bBRvmMrXR5

Netanyahu enacted a settlement freeze for 10 months. It was Abbas who refused to negotiate. https://t.co/pLSNHNmk3t

Show me where @AdamMilstein called you a “terrorist” you liar!

You’re so full of BS!

The line about AIPAC and Oslo is false, and the part about Netanyahu is misleading https://t.co/L2tj0ZDxTi

The amount of fact-checking Omar requires every time she speaks or tweets about Israel is… well, it's not great Bob.

This is false. You criticized @AIPAC using antisemitic rhetoric that you later reiterated. Moreover, AIPAC has supported a 2-state solution for decades. And Israel's security IS a guarantee of peace and human rights. Just look how its enemies behave, even toward their own people. https://t.co/Y769CpPvtb