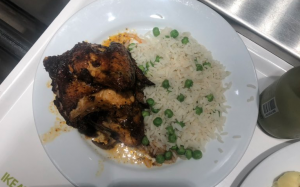 Sorry to be tardy to the party, but I didn’t know IKEA served food.

You see, I live out in the beautiful, rural suburbs of New York (hold your pitchforks) and I’m not terribly fond of travel, so I’m not about to drive six hours to Brooklyn for a cube organizer. Similarly, you can’t get me to drive 40 minutes up to the city to experience the wonders of Chick-fil-A I hear y’all rave about all the time. But I digress.

Apparently, IKEA is known for some wonderful Swedish meatballs as well as their build-it-yourself home goods and, in the UK, they decided to expand their menu a bit with some Caribbean jerk chicken.

Considering the sizeable population of British Jamaicans, it’s not a bad move to offer something like jerk chicken, a classic and delicious Caribbean dish. It wasn’t a good move, however, to screw up the traditional recipe.

According to The Daily Wire, IKEA’s jerk chicken was served with a side of white rice and shelled garden peas, which earned the furniture store a public flogging for apparently not having Googled the fact that traditional “rice and peas” is actually made with beans called Gungo peas or pigeon peas.

Now, in some bygone era, we’d either make jokes at IKEA’s expense, maybe call them to inform them of the confusion, something like that. You know, being the sane, rational, forgiving people that we are.

Not in 2019, though. No, IKEA had the sheer misfortune to make this silly, innocuous blunder in the year of our Lord 2019, where the cultural appropriation police never sleep (’cause they’re woke, get it?) and anyone can be “canceled” for any sin against the cult of leftism.

Long story short, the leftists of Twitter freaked out:

How ironic that this punctuation person doesn’t recognize their own privilege in being served a plate of delicious food, albeit incorrectly prepared, and saying, “I’m not eating it.” Did this dude’s mom never give him the “starving kids in China” spiel? Apparently not.

This was as simple as Googling a pic, but pretending to be a diverse company was more important than getting it right. https://t.co/7tkk65GI9i

Sure, they could have and should have at least Googled the damn thing, but where do we get off maligning motives with zero evidence? Nonsense.

Yet another example of a brand with no diversity around the table. IKEA…….. https://t.co/ukOU8aTLKX

Yup, we need to enforce “brand diversity” so as not to upset folks like this, apparently.

It's literally white rice and garden peas 😭 @IKEA did you even Google it?!

If you were confused, beans are called peas in the Caribbean.

This is what happens when you try and cash in on a culture with no input from that culture whatsoever.https://t.co/Ste2tLFs6l

Because attempting to cater to a cultural sect is “cashing in” on that culture. Yup. Sure.

Thankfully, a good few folks stood up for IKEA, like this dude:

#Ikea dont owe anyone any apology. I stand with Ikea. They said Jerk chicken and rice and peas NOT rice and beans which we Jamaicans call peas. How many Jamaican chefs try other culture food and add twist to it? This look way better than some Jamaican food I've seen. pic.twitter.com/AYaN6Eo7DB

I mean, plain white rice and peas sounds more like a mistake than a “twist,” but I’m with this dude.

Ultimately, IKEA chose to rectify the situation in order to appease the woke crowd, so they swiftly issued an apology and removed the dish from their menu:

IKEA is a Swedish home furnishing company with a much-loved food offer. We take inspiration from many countries around the world and have always worked to combine different flavors and ingredients to offer delicious, healthy and affordable dishes. … We’re aware that our new jerk chicken, served with rice and peas has created some conversation and in some cases offense. Our intention was to create a dish for many people to enjoy but we appreciate that we may have got it wrong. We apologize and we are now relooking at the dish.

Sorry to hit a heavy note, but I can’t help but wonder what my missionary friends in Africa and other developing nations must think of a culture that makes such a hideous stink over something so benign as a screwed up ethnic dish. Send all that rice and peas to Kenya; they’d be thrilled to have it regardless of its cultural accuracy.