If This MSNBC Reporter Had Covered Maryland’s Gun Laws Instead of Florida’s, It Would Have Made a Very Different Point 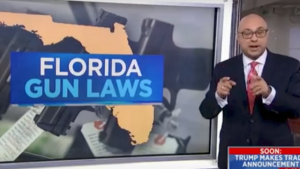 Well, here we go again–another shooting, another endless news cycle of terrible arguments in favor of gun control based on little evidence and a whole lot of alarmist rhetoric.

One MSNBC reporter, eager to jump to the front of the line with a detailed rebuke of Florida’s gun laws, didn’t even bother to find out where the Jacksonville Landing shooter lived, and purchased his firearm, and whether or not these laws had literally anything at all to do with the shooting.

MSNBC anchor Ali Velshi could have actually just checked the news before diving into his segment, as it had already largely been reported that police had raided a home in Baltimore, MD following the shooting, but he apparently worked so hard on his “Florida’s gun laws are literally Hitler” presentation he couldn’t be bothered to determine if it was still relevant.

“As we wait to learn more about the gunman who opened fire at a video game tournament in Jacksonville, Florida, and where he got his gun, it’s worth taking another look at gun laws in Florida,” he began, according to NewsBusters.

He then proceeded to dive on in, with his fancy touchscreen and images of big scary black guns and big red “X”s to indicate all the scary freedom Florida’s gun owners are allowed (you can watch the whole segment here).

No permit to purchase required, no gun registration, permits required (happy green check mark!) to carry a handgun, thankfully, but another big scary “X” for no permit required to carry a rifle (because we all know cops in Florida won’t bat an eye if you just walk around with a rifle), etc.

Now, had he actually been interested in putting together an honest news segment that discussed the gun laws where the shooter had actually purchased his weapon, he would have found himself swiping across a blueprint for “common sense gun control”: universal background checks, permit to purchase, registration, licensing for owners, and license to carry for handguns, which are very limited.

Which is exactly what Dana Loesch pointed out:

Except the killer purchased his two handguns in Maryland, which has 30 day waiting periods, universal background checks, registration, license to purchase, may-issue LTC, ban on perviously institutionalized persons owning guns, and no reciprocity with Florida. https://t.co/1cIvE5mvNj

But had he done that, he would have sounded like he was presenting evidence as to how stricter gun laws could not have prevented this tragedy.

And we certainly can’t have that, cane we?