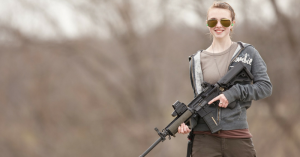 While there’s normally a prolonged revival of the perpetual gun debate in our nation following every high-profile mass shooting, the Parkland shooting has resulted in a significantly longer national conversation (or perhaps “yelling match” is more accurate) as the media decided to make stars out of the handful of Parkland students who began organizing for gun control following the shooting.

We’ve already heard that the NRA has been experiencing record membership and fundraising numbers for the last two months, but now, FBI background check requests are indicating record-high gun sales for April as well.

April 2018 saw the most gun-related checks run through the Federal Bureau of Investigation’s background check system.

The National Instant Criminal Background Check System (NICS) ran 2,233,213 checks in April, according to an FBI document. That’s nearly 90,000 more checks than the previous April record set in 2016. It also represents the second month in a row to set a record with March seeing 2,767,699 checks.

With a revived hysterical cry for gun control, Americans respond the way Americans ought to: by practicing their Second Amendment rights while they still have them. Exercise your rights or you’ll lose them, as the old adage goes.

The Obama administration promised frequently to remove more weapons from the hands of law-abiding Americans, but as a result, federally licensed firearms dealers saw a record uptick in gun sales.

Back in 2016, when we were faced with the very real possibility of the fascist pantsuited ice queen herself, Hillary Clinton, as our next president, Americans flocked again to FLFs to purchase weapons while they still could.

So, what’s the moral of the story? Americans aren’t idiots. We know why our forefathers found it worthwhile to specifically state that the Constitution of the United States of America, doesn’t just grant, but protects and defends the rights of American citizens to be armed.

It is the foundation of our liberty, and, as we’ve been doing since 1776, true American patriots always want to be prepared to defend this sacred liberty, especially when anyone threatens to send us back into tyranny.