If Only President Trump Were as Smart as Those Democrats 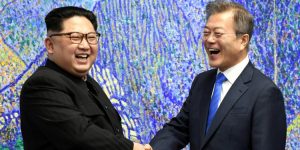 One of the first challenges Donald Trump faced as President was ending North Korea’s growing nuclear weapons program. Kim Jong Un, bolstered by a weak Obama administration seeking appeasement at any cost, found the new POTUS had a different approach. Undeterred, he doubled-down on his schoolyard bully approach, scaring Democrats and their media lapdogs nearly to death.

When President Trump met Rocket Man’s threats head-on, the left was almost apoplectic. Unfortunately, however, they still managed to speak, and speak, and speak, and speak about how they thought the Commander-in-Chief should handle the North Korean dictator. As many as there were, all of the comments had a few common themes.

First and most important was that the career politicians were all much smarter than President Trump. Next, they were more experienced and, therefore, more qualified to deal with the problem. Finally, almost every Democrat was sure he was going to start a war we couldn’t win.

Elizabeth Warren, apparently unaware of the President’s former career said, “I want to see our President succeed, because if he succeeds, America succeeds. The world is safer. But I am very worried that they’re going to take advantage of him.”

Ever supportive of the new administration, Nancy Pelosi was nearly breathless with worry when she declared, “Every day, the President gives Congress reason to return and debate the use of force. The President’s escalation in Syria and his saber-rattling on North Korea demand serious and immediate Congressional scrutiny. Speaker Ryan must call Congress back into session for classified briefings and debate. Congress must do its duty and honor our responsibility to the Constitution.”

Early in 2017 Representative Ted Lieu, a Democrat from California, told CNN’s Wolf Blitzer, “It’s been less than 100 days and our secretary of state has basically said he’s going to stop talking about North Korea. That shows to me that they have not tried very hard nor understood the potentially catastrophic consequences of what a military solution might mean.”

“I’m not asking the President to telegraph his actions to the North Koreans,” Congressman Ben Cardin, a Democrat from Maryland, told Erin Burnett on CNN. “I am asking him to confer with us, the Congress of the United States, so that we’re all together on this. Our concern is that we don’t know if he knows what his policy is in regard to North Korea.”

Brian Stetler, another CNN talking head, said of President Trump’s North Korea strategy, “When I look at this … I wonder, are we at the point where folks on TV should be questioning the President’s stability?”

After President Trump acknowledged the potential for “a major, major conflict” if North Korea refused to abandon its nuclear weapons program in an interview with Reuters, Senator Chuck Schumer proclaimed, “I don’t think those were the right words, but even more so I think he’s handling it all wrong. The only way to really stop North Korea from doing what it’s doing, short of war, is to get China to fully cooperate.”

Maxine Waters, offering her predictable opinion of the President’s handling of the rogue nation said, “This is not the time to go bluffing and threatening. This is the time for diplomacy.”

Today, in an historic summit, South Korean President Moon Jae-in and North Korea’s Kim Jong said in a joint statement, “The two leaders declare before our people of 80 million and the entire world there will be no more war on the Korean peninsula and a new age of peace has begun.”

We should all breathe a sigh of relief and be grateful that President Trump isn’t as smart as all these leftists.