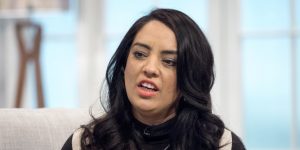 Apparently everyone should be sacrificed for the sake of diversity…especially sexually abused young girls. 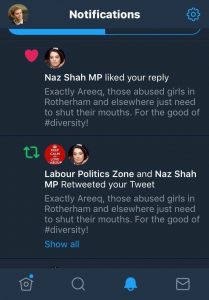 “The full retweet in question reads: RT @Owen_Jones84: @AreeqChowdhury @NazShahBfd Exactly Areeq, those abused girls in Rotherham and elsewhere just need to shut their mouths. For the good of #diversity!

The original tweet was posted by a spoof account pretending to be Owen Jones, left-winger extraordinaire (@Owen_Jones84).”

Apparently an online joker using an account impersonating Owen Jones has made a satirical comment saying that ‘abused girls in Rotherham need to shut their mouths,’ and for some reason only known to Naz Shah herself she has identified with the satirical tone of it and decided to retweet it (post it to all of her Twitter followers).

After this, around eight minutes later, she has realised that it was a major error of judgement on her part, and she has deleted it.

Unfortunately sites like Politwoops record EVERYTHING just in case this sort of thing happens!