IDIOT ALERT: Man plans to launch himself in homemade rocket! Guess what his reason is 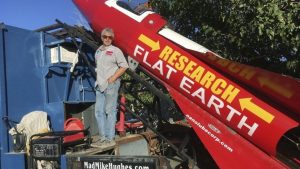 Mike Hughes, a 61-year-old limo driver, claims to have built a steam-powered rocket out of scrap metal parts in his garage. The project cost around $20,000, including the purchase of a motor home off Craigslist that was converted into a ramp. He says he intends to use the rocket to prove that the earth is actually flat.

Hughes plans to launch himself 1,800 feet high on Saturday in a home-built rocket to prove that astronauts faked the shape of the Earth.

Personally I’m not sure if he built a rocket or a casket out of spare parts in the garage. Or perhaps an urn since the whole project may wind up in ashes! Flat or not? I guess we will never know

He estimates that his homemade rocket will travel 500 mph.

“If you’re not scared to death, you’re an idiot,” Hughes said. “It’s scary as hell, but none of us are getting out of this world alive. I like to do extraordinary things that no one else can do, and no one in the history of mankind has designed, built and launched himself in his own rocket.”

Or at least survived to talk about it!

Keep up with the world around you (the round one…not the flat one)! Be sure to follow Political Cowboy on Facebook and subscribe to The Chad Prather Show podcast.