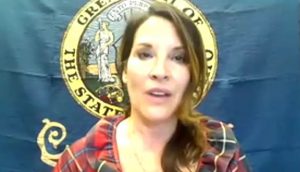 Gov. Brad Little of Idaho stated that when he arrives back home from his trip to the Mexican border, he will take actions to rescind executive orders that were originally issued by Lt. Gov. Janice McGeachin that made K-12 schools, universities, and any person who claims to have a conscientious objection from participating in mandated vaccination and testing.

Little stated Tuesday evening he would be “rescinding and reversing any actions taken by the Lt. Governor” when he arrived back in the state on Wednesday and stated he had “not authorized the Lt. Governor to act on [his] behalf.”

McGeachin, who is the acting governor during Little’s time away, announced on Tuesday that she had issued an executive order that fixed Little’s executive order concerning “vaccine passports.”

Little was on a visit to the southern border to converse with other Republican governors about the immigration issue when McGeachin issued the executive orders. In the absence of Little, McGeachin is the acting governor of Idaho until his return.

The two have clashed in the past, with McGeachin banning mask mandates while Little was out of the state in May. Little overturned the ban immediately upon returning to the state, calling the backdoor executive order an “irresponsible, self-serving political stunt.”

Today, as Acting Governor, I fixed Gov. Little's Executive Order on "vaccine passports" to make sure that K-12 schools and universities cannot require vaccinations OR require mandatory testing. I will continue to fight for your individual Liberty! #idpol pic.twitter.com/Jz87jfZaWc

While both of Little and McGleachin are Republican, in the state of Idaho, the governor and lieutenant governor don’t run on the same ticket. McGeachin is planning to run against Little for the governor’s seat in the midterm elections next year.