HURRICANE HARVEY: Texas is Amazing – What This Officer Did Was Awesome! 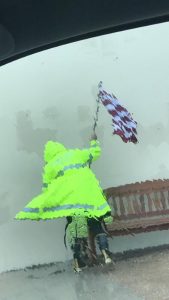 A policeman in Aransas Pass, Texas is being hailed as a patriot today when he braved the winds and rain of Hurricane Harvey to save an American flag from being blown off of a flagpole. The moment was caught in a picture that is now going viral.

SilenceIsConsent.net tells us Aransas Pass was in the path of Hurricane Harvey’s fury yesterday, when officer Jack McCarty was patrolling the city looking to provide help to anyone who decided to stay. Even though the hurricane had yet to make landfall, winds and rain were excessive. When McCarty came across a flag on a flagpole being battered by Harvey’s winds, he exited his patrol car and saved the flag. A fellow officer captured the moment in a picture that was later posted on the police department’s Facebook page. Even though rain made the image a bit blurry, McCarty’s heroism is evident.

The photo was posted with the description “While some dishonor and desecrate her, APPD Ofc. Jack McCarty will stop at nothing to honor and save her. #GodBlessAmerica #HurricaneHarvey”

Here is the picture that quickly went viral. What are your thoughts?

Other storm stories: In case you missed this article take a look at what the storms brought into one Texas family’s home! Click here – https://politicalcowboy.com/watch-hurricane-happening-look-storms-brought/