Hurricane Harvey and the Heroes it Produced

As Hurricane Harvey continues to affect the Gulf Coast with massive damage and flooding, all kinds of people have come to the rescue. Emergency responders of all kinds have shown up to help victims of the flooding, including reporters covering the storm.

The studios of KHOU channel 11 began to flood, displacing the news team out into the field. Reporter Brandi Smith was on location near a spot a truck driver lost his life in a flood last year, when she spotted another truck trapped in the same predicament.

At that moment, a sheriff’s department truck drove by, and Brandi was able to flag them down. The truck driver was pulled to safety, thanks to the Harris County Sheriff’s Department and Brandi’s quick thinking.

Some cable news journalists have also been helping people stranded by floodwater.

CNN’s Drew Griffin rescued a man from his pickup truck after he accidentally drove into a ravine. Drew and the CNN crew were able to get the man out before he was taken downstream.

A lot of people who just happen to own boats were helping rescue flood victims Brandon McElveen, a middle school counselor and softball coach, helped rescue 20 people with his kayak. And one photo that went viral was of a grandmother taking a jet ski out of her own front door.

One guy even saved someone with his paddleboard skills! Alexandre Jourde safely paddled four-year-old Ethan Colman to safety.

Heros have emerged from everywhere! 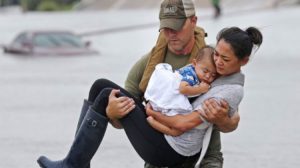 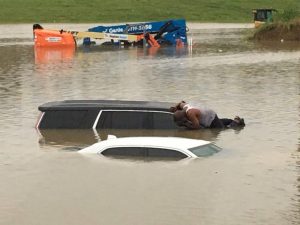 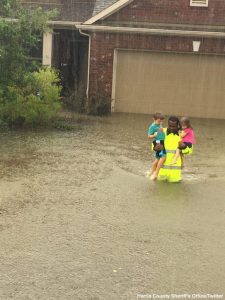 Some scenes in #Houston will break your heart. This is one of them.#HoustonFlood #HurricaneHarvey pic.twitter.com/hn6N643rBa

When shelters began to fill, one local celebrity opened his doors to the people: The Mattress King of Houston. Jim McIngvale, also known as Mattress Mack, opened his furniture stores to evacuees. Mack tweeted out that the stores were open, and even gave out his cell phone number for anyone to contact him.