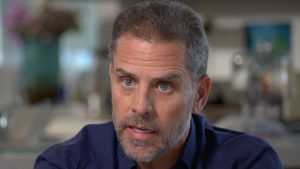 Apparently, Hunter Biden, son of President Joe Biden, has really tried just about everything in order to get his drug and alcohol abuse problems under control.

He’s tried yoga and therapy, even psychoactive drugs and ketamine.

However, in his new book, he says it was the secretions from the Sonoran Desert toad that helped him stay sober for a year.

Yes, you read that correctly.

He describes how he traveled to Mexico in 2014, as his marriage was unraveling, in a desperate attempt to get his life back in order, using drug treatments that were not legal in the United States.

First, he was given ibogaine, a psychedelic derived from plants at a clinic in Tijuana, which he says created a flickering “slideshow” of his life.

Then, at a beach house, a nurse administered 5-MeO-DMT therapy using toad secretions, which are believed by its fans to ease depression, heal the scars of trauma, and cure addiction.

“It was a profound experience. It connected me in a vividly renewed way to everyone in my life, living or dead. Any division between me my Dad, my mommy, Caspy, or Beau vanished, or at least became irrelevant,” Biden saysin his book called Beautiful Things, using a family nickname for his sister Naomi who passed away with his mother during a 1972 car crash.

“It felt as though I was seeing all of existence at once – and as one,” he went on to write.

Many individuals who have used this particular drug say its effects are like having a religious experience. I’m sure it does.

Former world champion boxer Mike Tyson has also taken the drug and is a huge fan of it. No surprise there, right?

“It takes you to a place that takes you to another dimension,” he said on an episode of his podcast from 2019. “Ever since I did it, I’ve had a miraculous change about me.”

However, doctors and researchers say this particular drug can cause extreme emotional reactions and vomiting. Sounds like a lovely time, doesn’t it?

“I know it sounds loopy,” he says in the book. “Yet whatever else it did or didn’t do, the experience unlocked feelings and hurts I’d buried deep for too long. It served as a salve. … I stayed sober for a year afterward.”

Biden’s book was published on Tuesday.