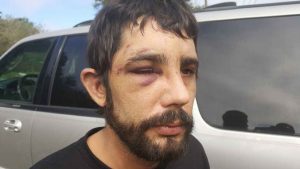 A Lithia, Florida family lives to fight another day thanks to one of its members responding to a vicious home invasion with an AR-15—in this case, an eight-months pregnant mama bear.

“I’ve got a fractured eye socket, a fractured sinus cavity, a concussion, 20 stitches and three staples in my head,” Jeremy King told Bay News 9, recalling the terrifying incident. “I took a severe beating.”

According to King, two unidentified men burst into his home and began demanding money at gunpoint.

“They came in heavily-hooded and masked. As soon as they had got the back door opened, they had a pistol on me and was grabbing my 11-year-old daughter,” King said.

“I’m telling them, ‘I have nothing for you,’ and they’re like, ‘Give me everything you got.’ It became real violent, real fast.”

King says the men began pistol-whipping him and kicking him in the head before his wife, who remains anonymous, stepped into the scene.

After one of the men shot at her, Mama Bear got herself the family’s legally-owned AR-15 and returned fire.

The two invaders then did the smartest thing they’d done all night: they ran the hell out of there.

“When he came toward the back door in her line of sight, she clipped him,” King explained. “He made it from my back door to roughly 200 feet out in the front ditch before the AR did its thing.”

“Them guys came in with two normal pistols and my AR stopped it,” he said. “(My wife) evened the playing field and kept them from killing me.”

The man clipped by Mama Bear was found dead in a ditch outside the home by police. The other man, however, is still on the loose. Thanks to Florida’s strong “Stand Your Ground” castle laws, this mama more than likely won’t have to worry about any legal repercussions of defending her family, thank the Lord.

If you’re the mainstream media, however, there’s nothing to see here, of course. Just a legal gun owner protecting her family according to her uninfringed Second Amendment rights using the most evil boomstick ever created. No big story here.