HUGE: Gina Carano Set To Produce And Star In New Upcoming Film For The Daily Wire 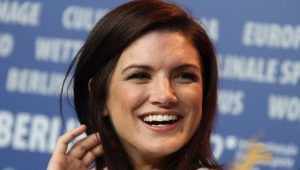 BERLIN, GERMANY – FEBRUARY 15: Gina Carano attends the ‘Haywire’ Press Conference during of the 62nd Berlin Film Festival at the Grand Hyatt on February 15, 2012 in Berlin, Germany.

Actress Gina Carano, who was fired this week from her role in “The Mandalorian” by Disney over social media posts is now partnering up with the Daily Wire to produce and star in a brand new exclusive film the company is working to put out for members of their site.

Carano and the Daily Wire made the announcement about the partnership on Friday, just two days after getting booted by the ever progressive Mouse House .

“The Daily Wire is helping make one of my dreams — to develop and produce my own film — come true. I cried out and my prayer was answered,” Carano said in a statement Friday. “I am sending out a direct message of hope to everyone living in fear of cancellation by the totalitarian mob. I have only just begun using my voice which is now freer than ever before, and I hope it inspires others to do the same. They can’t cancel us if we don’t let them.”

In announcing the new deal, The Daily Wire is offering a 25% discount for new members with the promo code “GINA.”

The new project is being produced as part of Daily Wire’s partnership with Dallas Sonnier and his production company, Bonfire Legend. The first film produced and distributed by the partnership was the feature-length thriller “Run Hide Fight,” released in January 2021.

“We could not be more excited to be working with Gina Carano, an incredible talent dumped by Disney and Lucasfilm for offending the authoritarian Hollywood Left. This is what Daily Wire exists to do: provide an alternative not just for consumers, but for creators who refuse to bow to the mob,” said Daily Wire co-founder and Editor Emeritus Ben Shapiro. “We’re eager to bring Gina’s talent to Americans who love her, and we’re just as eager to show Hollywood that if they want to keep cancelling those who think differently, they’ll just be helping us build the X-wing to take down their Death Star.”

This is a huge victory for conservatives in the battle against cancel culture and the fight for our right to create art that isn’t censored, where an artist can freely express themselves without fear of Hollywood pushing them out.

As Carano so elegantly put it, we can’t be canceled if we don’t let them do it!