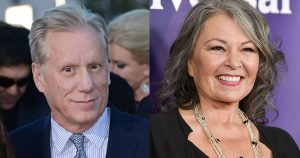 Twitter can often be a depressing cesspool of bickering and slander where civility and basic human decency has gone to die.

On the other hand, it can also be full of some fantastic ideas, that we can watch take flight in real time as users join forces to flesh out awesome proposals.

One great example was the recent suggestion that James Woods and Roseanne, two of the biggest Hollywood stars sent into cultural exile over their pro-Trump views (not that Roseanne didn’t bring it on herself a bit, thanks Ambien), join forces to launch a bigger, better sitcom than anything ABC would dare to touch.

Roseanne, of course, got booted from her own show earlier this year following Valerie-Jarret-Tweet-Gate, a decision some ABC execs recently admitted may have been a rash one.

ABC has replaced the wildly successful reboot of the classic 90’s sitcom with a Barr-less “The Connors,” and Woods, who has long been one of the most vocal (not to mention, one of the only) conservative actors on Twitter, took to his favorite platform to chide the network for nixing her.

Well, in general, firing the title character of any hit show (centered solely around that character) is hardly the apex of business acumen. This should be blatantly obvious to the most casual practitioner of programming. #Roseanne https://t.co/YZ5401BRGv

He expressed hope that Barr would “hijack” the Roseanne character and take it to another network.

James Woods’ loving the lesson in ABC ‘Roseanne’ disaster: ‘I hope she hijacks their a**es for a fortune …’ https://t.co/peOUfdN0mQ pic.twitter.com/QgZHmXlWUn

After posting a picture of the legendary comedienne “because he felt like it”, one follower asked if he’d consider doing a sitcom with her. His answer garnered quite a bit of support from fans.

Just felt like tweeting a pic of @therealroseanne. I don’t know why, just felt like it. pic.twitter.com/eH7Vu2EmwE 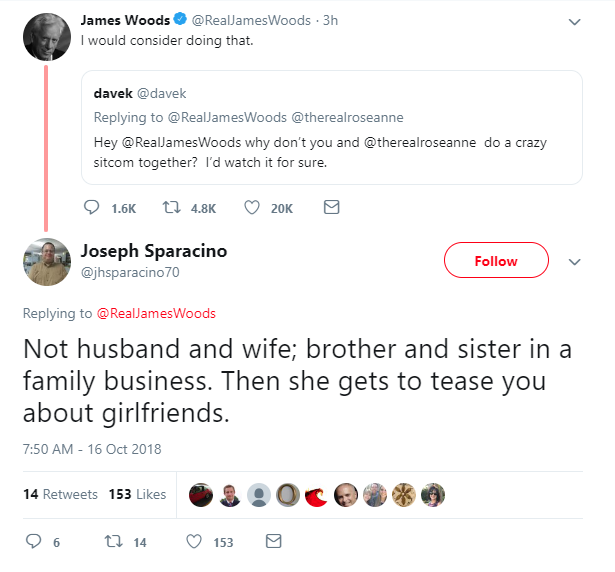 Fans jumped on the idea, suggesting various scenarios that might work without making things hairy legally:

Y'all are on to something. I like the premise.

There is, of course, one certain outcome if this collab were to take flight: