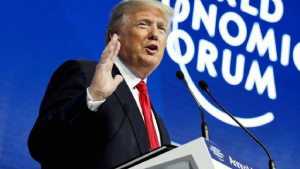 During the Obama administration, the mainstream media was quick to absolve him of all sins due to the fact that there had been a Republican in office before him.

Now that Trump is in office, anything good he does can be credited to Obama.

I’m going to sound like a broken record here but this is why we don’t trust the mainstream media.

An op-ed in Investors Business Daily explains that as the economy under Trump booms, the mainstream media is scrambling once again to rewrite history to give full credit to Obama, despite the fact that they reported for years while Obama was in office that the economy was floundering under him.

The stronger the economy gets under President Trump, the more desperate his critics are to hand credit over to Obama. Even if that entails changing the past.

A recent New York Times story says it all: “An Economic Upturn Begun Under Obama Is Now Trump’s To Tout.”

The article begins by admitting that “by nearly every standard measure, the American economy is doing well,” then spends the next 1,400 words arguing that the current good times have nothing to do with Trump’s economic agenda.

Oh yeah? Let’s flashback to 2016, where The Times was singing a very, very different tune:

on January 27, 2017, after the government reported that GDP growth for all 2016 was a mere 1.6% — the weakest in five years — the Times announced that “President Trump’s target for economic growth just got a little more distant.”…

Growth had been so worrisomely slow throughout Obama’s two terms in office that journalists started warning about “secular stagnation.” They said the country was in a period of long, sustained, slow growth resulting from slow population and productivity growth.

In August 2016, the Times declared that “the underlying reality of low growth will haunt whoever wins the White House.”

Investor’s Business Daily explains that while it is certainly common that federal policy takes a while to be reflected in the market, regardless of what the press says, it’s impossible not to give credit to Trump.

In fact, before ever passing new policy, Trump may have kickstarted the economy just by being elected:

We are the first to admit that the impact of federal policies take time to show up in the economy. But the fact is that optimism surged across the board as soon as pro-growth Trump won the election over stay-the-stagnant-course Hillary Clinton.

Polls show that the public gives Trump credit for what’s going on today. They, not the mainstream press, have it right.

The mainstream media appears to have committed fully to a never-ending battle against public opinion.

Rather than report on the news in a way that empowers people to draw their own conclusions, they’ve fatally committed to constantly trying to draw conclusions for the people.

But in the age of information, despite all the social media censorship and relentless anti-Trump rhetoric on the networks, the people are fed up.

We can see the success of a Trump economy right before our eyes, and after eight years of Obama, we know full well he never did a darn thing to boost our economy.