How Long Can The NBA, And Free Speech, Survive Its Censorship Feud With Communist China? 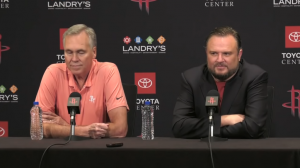 It seems as though the National Basketball Association belongs to an entirely different nation. Surely an organization capitulating to the whims of a violently oppressive communist dictatorship half the world away is not an American organization, but their every move in the wake of the Daryl Morey incident demonstrates they have sold themselves to the People’s Republic of China.

Morey sent the tweet heard ’round the world expressing support for the democratic protesters of Hong Kong (and, to be clear, “democratic” means something entirely different to a population looking to escape totalitarianism) last week, as we reported at the time.

A bunch of us have shared this, but #ICYMI, here's what @HoustonRockets GM Daryl Morey tweeted that offended his bosses and league officials pic.twitter.com/agjiLZjC2R

The NBA’s latest shameful kowtowing to Communist China was on full display during a Thursday press conference as CNN reporter Christina Macfarlane was shut down when she asked star players James Harden and Russell Westbrook about potential Chinese censorship in the league.

Instead of allowing the players to answer, Macfarlane was chided and a representative from the team took away her mic.

“The NBA has always been a league that prides itself on allowing its players and coaches  being able to speak out openly about political and societal affairs. I just wonder after the events of this week, and the fallout we’ve seen, whether you’d both feel differently about speaking out in that way in the future,” asked Macfarlane.

“Um, excuse me, we’re taking basketball questions only,” Macfarlane is heard being told by a team representative.

James Harden and Russell Westbrook were asked if they would “feel differently” about speaking on political and societal affairs because of the events with the NBA/China.

A spokesperson interrupted and informed the reporter that the players would answer basketball questions only. pic.twitter.com/zMe8uWz2hY

Later in the day, a spokesperson for the league released a statement apologizing for the incident, reported The Washington Examiner.

“During today’s Houston Rockets media availability, a team representative inappropriately interjected to prevent CNN’s Christina Macfarlane from receiving an answer to her question. We’ve apologized to Ms. Macfarlane as this was inconsistent with how the NBA conducts media event,” the statement said.

In spite of the NBA officially declaring that they had no plans to “censor” their players or staff, the backlash following Morey’s statement continues to grow.

“The NBA will not put itself in a position of regulating what players, employees and team owners say or will not say,” Silver said in a statement on Tuesday. “We simply could not operate that way.”

“I do know there are consequences from freedom of speech; we will have to live with those consequences,” he added. “For those who question our motivation, this is about far more than growing our business.”

Later that day, however, a husband and wife holding “Free Hong Kong” signs at a preseason NBA game in Philadelphia were kicked out of the stadium.

Sam Wachs and his wife had their pro-Hong Kong signs confiscated by NBA employees and were escorted out of the Wells Fargo Center arena after Mr. Wachs shouted “Free Hong Kong,” a message in support of the ongoing pro-democracy demonstrations.

these are the signs that led to two fans being kicked out of Tuesday’s 76ers vs. Guangzhou Loong Lions game *in Philadelphia* pic.twitter.com/xzQxhNyqIy

“There’s no foul language, no politics.’ I asked ‘Why not?’ They said, ‘Don’t give me a hard time,’” Mr. Wachs told Action News, adding, “I think it’s shameful, harsh reaction.”

The following night, folks wearing “Free Hong Kong” T-shirts at the Washington Wizards—Guangzhou Long Lions game in Capitol Arena in Washington D.C. were confronted by NBA representatives for their signs challenging the Chinese government. Both their “Free Hong Kong” and “Google Uyghurs” signs were confiscated.

To be perfectly fair, China has come after the NBA with a vengeance, seeking to ban all thoughtcrimes by their employees and patrons with the same iron fist it wields over its citizens. According to CNBC, more than 640 million people in China watched the 2017-2018 NBA season, so the NBA does stand to lose big in defense of free speech.

According to Business Insider, state broadcaster China Central Television (CCTV) and livestreaming platform Tencent Sports announced on Sunday that they would no longer broadcast Rockets games.

Tencent Holdings represents the NBA’s largest digital partner outside the US, Business Insider continues, having struck a $1.5 billion deal to stream games and other NBA content in China back in July.

Every single one of the NBA’s wholly-owned Chinese sponsors has also suspended ties with the league as of Wednesday, according to CNN Business, including CTrip, China’s biggest online travel website, and the Chinese fast-food chain Dicos.

According to Reuters, Nike has pulled every scrap of Houston Rockets merch from their shelves in their Chinese stores:

Houston Rockets sneakers and other merchandise were pulled from several Nike stores in major Chinese cities amid the furor surrounding a tweet from the team’s general manager in support of anti-government protests in Hong Kong.

Managers at five Nike stores in Beijing and Shanghai told Reuters during visits on Thursday they had been told in recent days via a memo from management that all Rockets merchandise had to be removed. Reuters was unable to view the memo.

The feud between China and the NBA doesn’t appear to be losing speed any time soon. How long can the NBA hemorrhage revenue from their Chinese market?

In an op-ed for USA Today, Stanley Chao, author of “Selling to China” and managing director for All In Consulting which aids Western companies in tapping into Chinese markets, declared that Morey should resign to preserve the NBA’s revenue, investments, and goodwill:

I tell my business clients to never give their opinions on the “3 T’s” when in China: Trump, Taiwan and Tiananmen. Now I’ll add a couple more “no no” topics: Hong Kong, the trade war and President Xi Jinping. In fact, just keep it simple and stick to the “4 P’s”: price, product, promotion and place.

Morey should resign to preserve the NBA’s billions of dollars of revenue, investments and goodwill. I know. It’s unfair and it’s un-American. In America, we all have the right to express our opinions without retribution.

But we aren’t in America when we’re part of the global economy. This is China. Things work differently in the Middle Kingdom, and any China-experienced business person knows that. Disney doesn’t share its brand name in other countries but does a joint venture in Shanghai. Google willingly submits to Chinese censorship, and other behemoths like General Electric, Apple and McDonald’s all accede to the Communist Party’s wishes.

I’ve got a few words in response to that, but they’re not nice.