How Important is Winning? 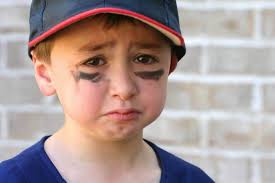 Somebody commented recently on one of my posts that “winning isn’t everything.” She said I need to back off on complaining about things like paticipation trophies. In her estimation kids should learn to be content with just competing.

This lady said that life is simply about being at peace where you are. Ok. Ok. Ok. I hear where you’re coming from and I believe in being content, but let me just throw out a couple of observations. First off, if winning isn’t everything then why in the world did

you spend the rest of your live long dadgum day ARGUING with strangers online that disagreed with you? Why weren’t you just content to make your point of profundity and then head back into your home of cyber obscurity? I’ll tell you why. Because you were dead set on winning!

If winning doesn’t matter then why are liberals crying over a lost election? Why did Hillary Clinton have an admitted meltdown post-election and go walking in the woods. At least she ran, right? Apparently that wasn’t enough for her

Folks, if you say that you’re not interested in winning then there’s something significantly wrong with you. You haven’t had enough of it because winning is like sex. When you do it a little bit then you want it for the rest of your life. If winning isn’t so important then why do I get messages everyday from people that say they are lost in life and are looking for a hand-up from someone that seems to be winning?

People will tell me it’s wrong to tell kids that it’s important to win the games they play. Like somehow competition is bad and that winning is evil. “It’s all in how you play the game baby!” That’s what the parents of the losing team say. How you play? Yeah as long as you’re playing to win.

Go ahead and have it your way. Stop keeping score. Let those booger eaters in bright uniforms just run around in the field shaking hands and high fivin’ for 90 minutes. Build that self esteem. Lock the fence and let em run. Like a dog park for little humans. But for the love of Pete don’t let em play a game that keeps score. The only problem is this – within five minutes those boys will be comparing boogers to see who picked the biggest one. Competition is a living, breathing thing no matter how much you try to relegate it to insignificance.

Oh horror of horrors. These kids might win! God forbid! The atrocity! It might ruin them and make them bullies. Please! I want my team to beat their opponent so bad they gotta call the game early. Cause guess what. You know what builds esteem? Uhhhhh winning!  Well what about the people who lost. Teach them to quit doing that. What a concept. “Winning isnt everything Chad.” Oh yeah? Get cancer and tell me that it isn’t.

Make winning in life a habit people. If you can’t beat them. Arrange to have them beaten. I kid. Be a winner in your mind first and then let it play out in our life. You’ll like the results.