How About Instead of Protecting Our Kids From Being Offended, We Start Teaching Them About Freedom? 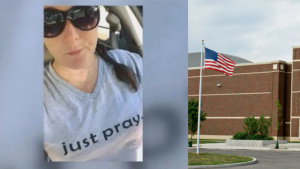 Political correctness is so cancerous, you can now be punished for praying for a girl with cancer.

An Alabama grade school teacher last week wore a shirt so offensive, so inappropriate, so incredibly outrageous, school administrators had no choice but to send her home to shield the innocent little ones from the stunning message.

What were the words this teacher had emblazoned across her shirt that resulted in her being sent home?

No mention of God, Jesus, the Bible, or anything that has become absolute anathema in America’s public schools. Just that simple message: just pray.

Now, this might seem absolutely ridiculous, considering how completely unoffensive it is to wear a shirt that mentions prayer on it. Prayer is a universal aspect of all spiritual worldviews, from Hindu to Muslim to Christian to Baha’i (don’t ask).

The reason the teacher, Chris Burrell of Pearl Haskew Elementary School in Alabama, had the shirt in the first place was to benefit an 11-year-old with brain cancer.

11-year-old Aubreigh Nicholas was diagnosed last year with a rare and inoperable brain tumor, according to The Christian Post, and Burrell says she was just trying to show her support for the girl as well as encourage her students, in a now-deleted Facebook post on the incident.

“Getting sent home from work today to change my Just Pray shirt. I purchased this shirt to raise money for #AubreighsArmy. I thought it was fitting to wear today since my kids were testing,” she wrote.

“I didn’t think twice about it. I wasn’t trying to promote religion, it was just my Monday feel good shirt. In my 15 years of teaching this has never been an issue. My heart hurts,” she added.

“So at the point of looking and seeing ‘pray’ on it, the principal said, can you put on a sweater or something, knowing that there are other people who object to that … we have to be cognizant of everyone’s beliefs or everyone’s thoughts in a public school,” she explained.

Whatever happened to the First Amendment? It has been completely demolished in our public schools, and administrators want to sanitize everything out of fear of offending non-Americans or atheists.

Well, this country was founded on the Judeo-Christian values that people can’t be told by any other man on this earth what they can or can’t believe, so maybe if students are going to school here they should actually get a chance to learn about these things!

To think we are at the point of shielding our youngsters from ever hearing the simple message to “just pray.” If you don’t want to pray, you don’t have to, since when are messages on anyone’s shirt a command?

Imagine what we could get accomplished in our schools if we stopped worrying about offending anyone and started actually teaching students about how great freedom is!