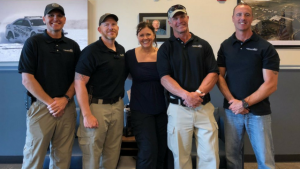 Quinn Cunningham is a 23-year law enforcement veteran with 17 years of experience with a Colorado SWAT team. So when it comes to the best way to secure a school in the event of a shooting, he definitely knows what he’s talking about.

And he’ll be the first person to tell you that civilians, not police officers, are the first responders in the event of a shooting.

Cunningham was one of the police officers to respond to a deadly 2013 shooting at a Denver area high school, and he has since put his experience to good use–training teachers to be the first responders in the event of a shooting.

Speaking to the Washington Free Beacon, he recounted that fateful day:

“When something like that happens, pretty much the whole city comes,” Cunningham told the Free Beacon. “The whole metro area came. I was about twelfth into the school from what I understand. We went into the school, and we’re moving through the hallways. It was me and two other cops who I had never seen before. I don’t remember what agency they’re with and I haven’t seen them since. And we’re moving through the school, and normally when we do scenario-based training for an active killer, there’s a lot of distractions and a lot of fire alarms and role players and all this stuff, screaming going on. And it was dead silence, like deafening, distracting silence. To the point where it was, ‘What’s going on? Where are the kids at?’ And I’m looking at my watch like, ‘What day is it?'”

“They were so good with their lockdown procedures and their active killer procedures that all the kids were barricaded in their classrooms, the doors were locked and they were armed with chairs, fire extinguishers,” Cunningham said. “If anyone came to that door, they were going to fight.”

But it was what happened next that deeply impacted Cunningham.

After entering the school, the attacker came upon 17-year-old Claire Esther Davis. He shot her in the head before chasing a teacher to the school library where he set off the Molotov cocktails and eventually shot himself. The attack was over in less than 2 minutes. It was only 46 seconds between the time when the school resource officer called for help and when the shooter took his own life.

Witnessing the scene of Davis’s murder had a profound impact on Cunningham.

“So, we’re moving through the school, and I came around the corner and there’s the crime scene,” Cunningham said. “Forty-six seconds, we lost one student. The reason I’m doing this is because of that crime scene.”

He says the scene of Davis’ murder is “seared” in his skull, but that in that moment he made a promise to her which he has kept ever since. Shortly following the shooting, he founded his own training program to equip teachers to respond to active shooter situations, which would eventually come to be known as FASTER.

“I made a promise to her,” Cunningham said. “I made a promise to her that I couldn’t give my life for her that day, but I’ll give every day of my fucking life for her. For the rest of my days. And that’s why I do it. That’s why I want this so bad. I want this program so bad because no one deserves to die in their school. No one should go to school worried about getting shot.”

Laura Carno, the executive director of FASTER, shares Cunningham’s vision and points to recent shootings in which teachers sacrificed their lives trying to protect their students, despite being unarmed.

“If [Marjory Stoneman Douglas High School] Coach Aaron Feis had been armed, he would have been able to protect those kids with something other than his body, he could’ve saved them,” she told the Free Beacon. “He could’ve saved whoever was killed after that, and he would’ve gone home to his family. What about the teachers’ right of self-defense or the coach’s right of self-defense? Just because they choose that very noble profession they lose their right to self-defense. That’s not okay.”

Can you imagine if more teachers were equipped and trained by experts like Cunningham to protect and defend the students whose lives are entrusted into their care each and every day? And how much more of a deterrent it would be to would-be school shooters if schools became hard targets, not the fish-in-a-barrel soft target that gun free zones inevitably become?

The greatest hope for gun-training proponents like Cunningham and Carno is that if potential attackers begin to view schools as hardened targets with armed resistance where they might get shot before ever being able to harm somebody else, school shootings may become even more rare or stop altogether.

“When our kids stop being targets because these bad guys know they can’t kill kids anymore because they will be met with armed resistance, that will change our culture,” Carno said.