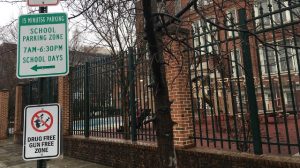 In a move that’s sure to send the left into complete hysterics — which really isn’t a feat that’s too difficult to accomplish these days — Rep. Thomas Massie has introduced a bill called the “Safe Students Act” designed to remove gun-free zones from federal law.

The ultimate goal of the bill is to enable local communities to set their own gun policies, which is exactly the way it should be.

The Gun-Free School Zones Act was passed in 1990 and makes it “unlawful for any individual knowingly to possess a firearm at a place that the individual knows, or has reasonable cause to believe, is a school zone.” The original law was ruled unconstitutional by the Supreme Court in 1995 on interstate commerce grounds and later amended by Congress.

“Gun-free zones are ineffective and make our schools less safe. 98 percent of mass public shootings since 1950 have occurred in places where citizens are banned from having guns,” Rep. Massie said in a press release. “Banks, churches, sports stadiums, and many of my colleagues in Congress are protected with firearms. Yet children inside the classroom are too frequently left vulnerable.”

“Gun-free zones are ineffective and make our schools less safe," Says @RepThomasMassie, introducing a bill to repeal the federal Gun-Free School Zones Act. “Many of my colleagues in Congress are protected with firearms," yet schoolkids are "left vulnerable.” pic.twitter.com/9pex1BF4f8

Some research published by the Crime Prevention Research Center back in 2018 stated that 98.7 percent of mass shootings between 1950 and 2018 happened in these gun-free zones liberals seem to think magically stops bad guys from massacring people.

Truth be told, these zones only put innocent people in danger of being victims and providing prime opportunities for lunatics to get higher body counts, so it makes sense to get rid of these things and let folks decide for themselves whether or not they want their schools to be gun-free.

Teachers should probably be armed and trained in how to use these weapons in order to help provide an additional layer of protection for students in the classroom. There are steps that can be taken to do this safely for all involved. Let’s hope it happens.