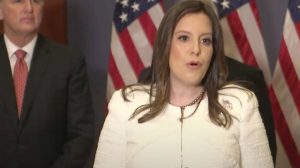 House GOP members have officially elected New York Republican Rep. Elise Stefanik as the chairwoman of the Republican conference, replacing Liz Cheney who was booted from the position earlier this week.

Rep. Darrell Issa of California stated that he voted for Stefanik and then told the press after he left the GOP conference meeting saying “it’s a very united conference.”

In a statement released after the meeting, Stefanik said House Republicans are “united in our focus to fight on behalf of the American people to save our country from the radical socialist Democrat agenda of President Biden and Nancy Pelosi.”

Wyoming Republican Rep. Liz Cheney was removed as the conference chair via a voice vote at a GOP conference meeting this week.

Both former President Trump and House Republican Leader Kevin McCarthy had endorsed Stefanik for the position ahead of Friday’s vote. Trump released a statement critical of Roy on Thursday.

Stefanik said her “focus is on unity” and thanked Trump as well as the voters of her district in a speech after the vote.

“He is a critical part of our Republican team,” Stefanik went on to say.

Many Republican lawmakers had stated that Cheney was a big distraction as the conference chair and wanted to get rid of her so they could focus on providing counters for Democratic policies and work toward winning back control of Congress in the 2022 mid-term elections.