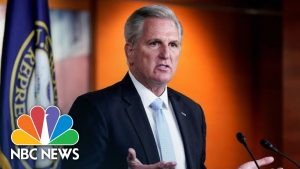 House Minority Leader Kevin McCarthy, a Republican from California, is now asking the Supreme Court to rule that the chamber’s proxy voting is unconstitutional.

The House of Representatives started allowing proxy voting back in May of last year as a way for members of Congress to social distance during the thick of the pandemic. House Speaker Nancy Pelosi made the announcement on Aug. 13 that members would be able to continue to cast their votes by proxy until the end of September.

McCarthy took to Twitter on Thursday and stated he was asking SCOTUS to step in.

“Although the Constitution allows Congress to write its own rules, those rules cannot violate the Constitution itself, including the requirement to actually assemble in person,” McCarthy went on to say.

The GOP leader credited the Founding Fathers with understanding the importance of in-person assembly.

“The founders wisely rejected proxy voting because they knew Congress cannot adequately ‘do the business’ of our chambers without deliberating, and we cannot adequately deliberate without assembling in person,” McCarthy went on to write.

“The Senate has managed through the whole pandemic without proxy voting because they know, as we do, that it is unconstitutional. To restore the House to its proper legislative role, the Supreme Court must strike down proxy voting,” he continued.

McCarthy said the proxy-voting period was a “raw abuse of power” by Pelosi.

“Since its adoption 14 months ago, proxy voting has shattered 231 years of legislative precedent and shielded the majority from substantive policy debates and questions, effectively silencing the voices of millions of Americans,” the congressman said.

“It was a raw abuse of power from the beginning that was done despite unified opposition from the minority and even members of the majority. Its continuation is an insult to hard-working taxpayers who are back at work safely while members in Congress get a pass to stop work but still get paid. Some members have barely voted in person for more than a year,” he added.

The rules initially adopted allowed for proxy voting in 45-day stretches the speaker has the option to extend, though the House sergeant-at-arms and the Capitol physician must first confirm there is still an ongoing public health emergency.