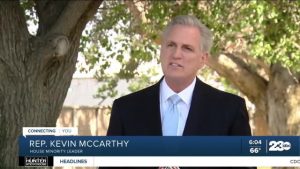 House Minority Leader Kevin McCarthy claims that the subpoena for documents and testimony from Steve Bannon that was issued by the Jan. 6 select committee is “invalid,” just ahead of the House vote to recommend that he be held in contempt of Congress for refusing to comply with the request made by the panel.

It’s pretty clear that the radical left isn’t satisfied to just have Joe Biden in office, wreaking havoc while pressing the liberal agenda down our throats. No, they want to obliterate former President Donald Trump and anyone associated with him.

Bannon, who was a private citizen at the time of the riots at the Capitol, cited “executive privilege” when pushing back against cooperating with the panel. His lawyer, Robert Costello, stated that he would “comply with the directions of the courts.”

While the panel was issued subpoena power, McCarthy (R-Calif.) said the courts should determine whether Bannon would be covered by executive privilege.

“They’re issuing an invalid subpoena,” he went on to say during a press conference held on Thursday. “Issuing invalid subpoenas weakens our power, not if somebody votes against it. He has the right to go to the court to see if he has executive privilege or not. I don’t know if he does or not but neither does the committee.”

When McCarthy was pressed on his reasoning for thinking the subpoena was invalid, the House Minority Leader stated that he believed the entire select committee was invalid due to the fact it passed largely along party lines.

McCarthy has long been critical of the select committee, arguing it is politically motivated. He escalated his criticisms of the panel after Speaker Nancy Pelosi (D-Calif.) rebuffed two of his five selections — Reps. Jim Jordan (R-Ohio) and Jim Banks (R-Ind.), both allies of President Donald Trump — to sit on the committee. After the speaker rejected his picks, he opted not to have any of his members serve.

This whole thing smacks of a witch hunt, doesn’t it? This committee isn’t trying to bring anyone to justice. It’s trying to punish folks for being involved with former President Donald Trump. That’s it.