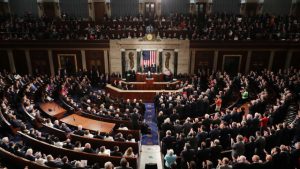 House Republicans got things kicked off on Monday for the 117th Congress by trying to block the absurd Democratic-crafted rules package for the current session, which would ultimately sideline the GOP.

Rep. Tom Cole, a Republican from Oklahoma, who also serves as a top Republican on the Rules Committee, demanded that a vote be held to delay consideration of the current resolution, which would dictate how the chamber is to operate over the course of the next two years.

“I really think my good friends in the majority need more time to present a fair rules package,” The Oklahoma congressman said.

Democrats control the majority and will defeat any effort by the GOP to thwart passage of the package, and it is poised to pass later today.

The new rules include a provision that will limit the ability of the GOP to pass last-minute amendments to legislation through a motion to recommit.

The Democratic rules package would also make it an ethics violation for members to knowingly distribute “deep fake” media, and it adds language requiring legislation to incorporate gender-neutral terms.

Minority Leader Kevin McCarthy, a Republican from California, is not at all a fan of the rules changes, delivering a speech on Sunday before he gave the gavel to Speaker Nancy Pelosi.

“These rules throw away over 100 years of representation in our nation’s Capital by effectively killing a key opportunity to amend legislation,” he stated. “Worse, they would penalize any member who shares news or views that liberals and their allies in the media deem ‘fake.’ They actually make it an ethics violation, which is usually reserved for such unbecoming conduct as bribery and corruption.”

The rules that the left are suggesting are absolutely wacko. There’s no other term that captures the insanity of the political correctness and virtue signaling contained in this package.

And what’s really crappy is that the Democrats have a majority in the House, so it’s probably going to pass. Political correctness ruins everything.