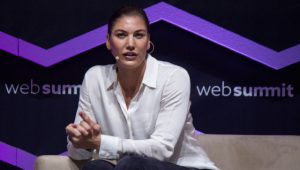 Former U.S. Women’s soccer team goalkeeper, Hope Solo, recently spoke out about how her fellow teammate, Megan Rapinoe, “almost” bullied the rest of the team into taking a knee during the National Anthem.

“I think the rhetoric surrounding this team has been both divisive and inclusive,” Solo went on to say about the situation. “I guess it’s kind of where we are in politics in this day and age.”

Rapinoe has become infamous for her political activism, and Solo stated that the soccer star really applied heavy pressure to the team to try and get them to kneel during the anthem that is played before games.

“I think the kneeling thing can be very divisive,” Solo said during a conversation with Goal.com. “I’ve seen Megan Rapinoe almost bully players into kneeling because she really wants to stand up for something in her particular way.”

The two-time women’s World Cup champion is one of several USWNT players who have made a habit of kneeling before games.

These players are especially outspoken about politics and equal pay in sports.

However, not every player has knelt, and no reports of any backlash against players who have chosen not to kneel have arisen.

Solo hasn’t played a game with the national team in the last five years, and Rapinoe herself just recently announced she’s taking some time to consider her future on the team.