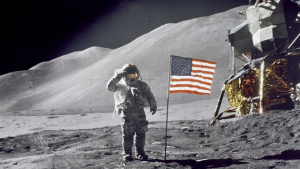 OK, OK, I know this isn’t exactly news. The American flag has been offensive for a while now. But it’s no less insane that it is.

I get that not every American worships the flag. That’s fine. We wouldn’t be America if we demanded patriotism.

But don’t associate the flag with fascism–especially when you want to rewrite history to delete the flag from one of the single most significant moments of all mankind.

You guessed it–they’re taking the American flag out of a movie about Neil Armstrong, the man who landed on the moon and put a freakin’ American flag on it.

The moment Armstrong placed our flag on the moon has been one of the most iconic moments in recent history, and an image that everyone would instantly recognize.

It’s not only crazy to take it out of a film about his life, it leads me to believe the movie will probably suck. Because how else could a movie about someone’s life be good if you took out the moment for which they were most famous?

A new biopic titled “First Man,” starring Ryan Gosling as Neil Armstrong, the astronaut who was the first man on the moon, omits one crucial moment in what is arguably the most historic event in world history: Armstrong planting the American flag on the moon. When Gosling, who is Canadian, was asked about the omission, he responded, “I think this was widely regarded in the end as a human achievement [and] that’s how we chose to view it.”

Who else is ready for conservatives to start making movies? Or even just people who don’t have vehemently anti-American views? Because I am so sick of this garbage.