On Tuesday Anheuser-Busch responded to complaints over its support of the National Football League.

Anheuser-Busch said they will reach out to the NFL over their anthem protests. It doesn’t take a marketing genius to see what’s down the road if the NFL doesn’t get its act together. And fast.

200 NFL players knelt during the national anthem this past weekend which was Gold Star Mothers Day. They in essence snubbed their noses at America and America said “hold my Budweiser and watch this!” 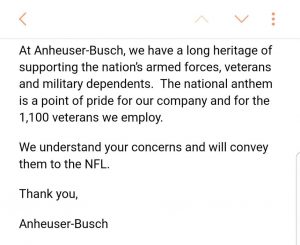 Budweiser responds to my complaints. Keep the pressure on https://t.co/7roNfi8nkX

BREAKING News From The Border- THEY GOT THEM!
AFF

Breaking: Iran Credited with Recent Drone Strike Against US
The Black Sphere

Hell Fire Preaching… Where Is That In The Scriptures? It Isn’t!
October 25th, 2021 Sons of Liberty Media