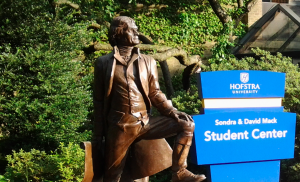 Various and sundry leftist student groups of Hofstra University are demanding the removal of a monument to an unlikely enemy: Thomas Jefferson.

In case you were mistaken, the bronze statue of the founding father doesn’t represent liberty, service to one’s nation, or even the academic eclecticism and excellence Jefferson is revered for to this day.

No, you micro-aggressor, get outta here with all that nuance and consideration. Jefferson was one of Western history’s many, many, many slave owners, so he stands for racism.

Last week, a gaggle of Hofstra’s “student activists” held the second annual “Jefferson Has Gotta Go!” protest. Beating their chests and laying down a whole lotta rhetoric, the student groups ramped up support to have the statue, which has been subject to vandalism with “DECOLONIZE” and “Black Lives Matter” slogans in the past, taken down.

Oh, my word. This is the second time these kids have worked themselves into a tizzy over an inanimate object.

To be fair, these future benevolent dictators don’t want to see the statue melted down and forged into a statue of Mark Zuckerberg (that process probably has too high a carbon footprint for their liking). Instead, they demand that the image of our third POTUS be shuffled off to a museum. The statue of a guy who owned slaves and died forty years before slavery was abolished is just too terrifying to be lurking around a college campus.

“Jefferson’s values aided in the construction of institutionalized racism and justified the subjugation of black people in the United States,” last year’s Jefferson’s Gotta Go petition read. “Jefferson has been embraced as an icon by white supremacist and neo-nazi organizations such as the Ku Klux Klan and online white supremacist chat rooms.”

Now, I know this is a university, so the standards for intelligent discourse and debate can’t be too high, but it sure would be nice to have some kind of information to back up the claim that the KKK worships Thomas Jefferson. Oh, but people talk about him in “white supremacist chat rooms.” What a damning indictment.

“Jefferson’s values aided in the construction of institutionalized racism and justified the subjugation of black people in the United States,” the petition continues.

Funny, I don’t hear anyone demanding Hofstra stop teaching Darwinian evolution (though I wouldn’t necessarily oppose that). Of course, Darwin, a veritable saint to the left, is the beneficiary of a whole lot of consideration of the culture in which he lived in order to explain away his view that all non-white races were inherently subhuman and that women’s brains were smaller.

But, Darwin isn’t an icon to those hateful, conservative bigots, which may be one of the only things separating him from Jefferson. Well, of course, except for Darwin’s legacy of racism in science, medicine, and public policy.

Naturally, these “activists”—it feels wrong to even give them a title that used to carry such weight and dignity, doesn’t it?— are also demanding that Hofstra implement “an online, bias reporting system, an online complaint receipt program, and mandated, comprehensive, cultural competency training.”

Once more, these liberal college campuses are proving to be breeding grounds for the most brainless, vocal kind of leftism. Social justice warriors want to throw all critical thought and consideration for historical context out the window in favor of having a perfectly sanitized safe space.

I only wish I was surprised by it.