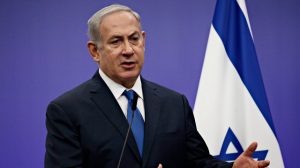 History was made over the weekend, as Israeli Prime Minister Benjamin Netanyahu met for the first time with Saudi Crown Prince Mohammed bin Salman in Saudi Arabia.

This marks the first such meeting, at least of one publicly, that has taken place between a prime minister of Israel and a top official from the government of Saudi Arabia.

Guys, President Trump has worked hard to make peace in the Middle East a reality. And it’s paying off.

#BREAKING: Israel PM Netanyahu and head of the Mossad flew yesterday to Saudi Arabia, and Met Pompeo and MBS in the city of Neom, according to Israeli officials

The meeting is the latest development in the ongoing growth of Arab nations rejecting their previous hostility toward Israel and joining in the effort to counter Iran, which they see as the gravest threat to peace in the Middle East. Those developments were fostered by the Trump administration, which rejected the dangerous Iran nuclear deal embraced by the Obama administration and instead concentrated on bolstering relations between Israel and the surrounding Gulf states.

The astonishing rapidity of Arab nations such as the United Arab Emirates, Bahrain, and Sudan all joining the Abraham Accords within three months in 2020 represented a historic shift in the Middle East, nurtured by President Trump.

It’s not surprising that Israel and Saudi Arabia would go public with the meeting between Netanyahu and the Saudi prince; they must be worried that a prospective Biden administration would coddle the despotic Iranian regime as the Obama administration did.

We know that’s likely to happen if Joe Biden is certified as the president because he’s made it clear, in no uncertain terms, that he would rejoin the Iran nuclear deal if he is put in the White House.

People think that giving billions of dollars to the Iranian government is going to somehow prevent them from building and possibly using nuclear weapons? These are the same people who take to the streets every so often and shout “death to America.”