Hillary Says She Won’t Run for President Again. But the Good News Stops There… 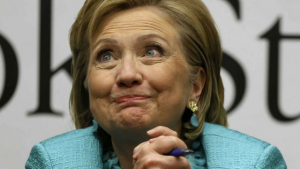 Today is a glorious day for American politics. For today we learn that two-time presidential candidate and possible least likable politician to run for office of this great nation has, after a year and a half of making every excuse imaginable for not winning the presidency, decided to throw in the towel and call it quits.

That’s right-after 18 months of un-gracefully not bowing out of the spotlight after her surprise defeat by Donald Trump, Hillary Clinton has announced she will never again run for President.

She made the revelation while being interviewed on her book, “What Happened”, by New Zealand journalist Hillary Barry.

“As we look ahead to the next election, would you run again?” Barry asked Clinton.

“I am going to be very active in this coming election, in 2018, because that will be the turning point,” she added.

Aaaah there it is. Of course she is. Even when she has finally announced she will no longer run for President, she still has big political goals.

OK, so she’s not really stepping out of politics at all and maybe it’s not a great day for the country. After all, as long as there’s a political scene with Hillary in it, we’re just going to keep getting the same old garbage from Washington.

But at least Hill has some inspiring words for any future female president: “Read my book.”

Right, so they can make all the same mistakes and blame everyone but themselves just like you?